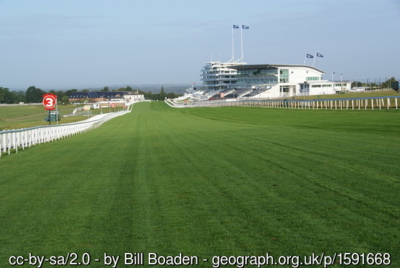 Epsom Racecourse is one of the undoubted jewels in the UK horseracing circuit, this historic course playing a pivotal role in the Flat season. Compared to other tracks, fixtures are thin on the ground in terms of quantity but almost unbeatable in terms of quality. In some regards the whole season is dominated by the Investec Derby festival, the Derby itself taking place on the first Saturday in June and the Oaks being held one day earlier. Other big races at this course include the Epsom Dash and the Coronation Cup, the former being an extremely fast sprint handicap.

The racecourse is situated less than 20 miles south of London and is very easy to get to. By rail, Tattenham Corner is the closest station and is within walking distance from the main grandstands, regular trains connecting with London Bridge and London Victoria stations. Public buses also connect with Epsom town centre while those travelling by car face a journey of less than two miles from the M25 motorway.

Epsom features Flat racing from late April to September and has one u-shaped course that switches back and is run left-handed. Featuring cambers, bends and significant downhill gradients, this is a unique test with runners facing a significant uphill climb followed by a turning descent. There is barely a flat section on the course and so we do see some course specialists here. Turns to the right and left are followed by a significant camber on the home straight and a stiff final furlong.

The five furlong course at Epsom is the fastest in the world and is downhill virtually all the way except for the final furlong. For the sprints, a sure-footed speedster is undoubtedly needed. Races of up to eight and a half furlongs are extremely sharp, this giving advantage to those ridden prominently.

When conditions are testing, horses tend to move closer to the rail on the stands side where there is generally better ground. Whatever the build and style of a horse at Epsom, they must be able to handle the turns, gradients and camber they will be faced with. This is a tough course and there can be no doubt that it really tests every single muscle along the way. This is a real test of a horse’s stamina and with the opening four furlongs of the Derby course being uphill, any over-racing in these early stages will be punished in the latter part of the race.

Over the past few seasons, Mark Johnston has been the trainer to watch at this venue with 20 wins from his 128 entries while Silvestre De Sousa has been the pick of the jockeys over this period with a strike rate of 23%, 34 wins coming from his 136 rides.

Overall there isn’t much of a draw bias over the five furlong course at Epsom, however this isn’t the case for the six and seven furlongs where front runners with a lower draw have a distinct advantage on almost all ground. The exception to that comes when things get soft, when the fields gravitate towards the stands rail.

The Epsom Derby and Oaks

It is hard to talk about Epsom Racecourse and not mention the Oaks and the Derby, the two undoubted highlights on the calendar at this venue. The Derby is the richest race of the Flat season and one of the five Classics of British racing. Purely for three-year-olds, the mile-and-a-half race is open to fillies although it is mainly contested by colts.

Leading trainers in the race are Fred Darling, John Porter and Robert Robson with seven wins apiece. The Oaks takes place on the Friday preceding the Derby and is open purely to three-year-old fillies. This is also one of the five Classics and has been dominated by Aiden O’Brien in recent years, this trainer winning seven times with his most recent being in 2018 with Forever Together.

In terms of the Derby and the Oaks, stalls 1 and 2 have been the ones to avoid in recent years and this has generally been the case, with high draws tending to perform better than par. Despite the idiosyncrasies of Epsom Racecourse, this is nevertheless a fair course with regard to the draw. Epsom is, indeed, by and large quite a fair track, although it is vital that your horse is well balanced enough to handle the testing cambers and turns.