There is a total of five racecourses north of the border in Scotland and, in the eyes of many fans, the most picturesque of the quintet is the Lanarkshire venue of Hamilton Park. Set amidst beautiful grounds and lying only 10 miles to the south of Scotland’s second city, Glasgow, this flat-only racetrack is hugely popular with Scottish racegoers and those from further afield.

Racing in the Lanarkshire locale certainly boasts a rich heritage, with events first being staged in the area way back in 1782. The current site opened more recently – holding its first meeting in 1926 – but it has already etched itself into the racing history books on a couple of occasions. Becoming the first British track to stage an evening fixture in 1947, Hamilton then went to the other end of the scale when holding the first UK morning fixture in 1971. Famed for its innovation, the track has proven to be one of the more successful venues when it comes to combining racing and big-name musical entertainment, whilst in 2015 it became the first Scottish track to provide racegoers with free wi-fi.

Hamilton’s season consists of close to 18 fixtures – all of which are held between May and October. There are no truly top-class contests at what is a relaxed venue, with the feature event of the year being the Listed Glasgow Stakes which takes place in July. Also worthy of note is August’s Lanark Silver Bell Handicap. Previously held at the now-closed Lanark racecourse, the roots of this event allegedly hark way back to 1165. 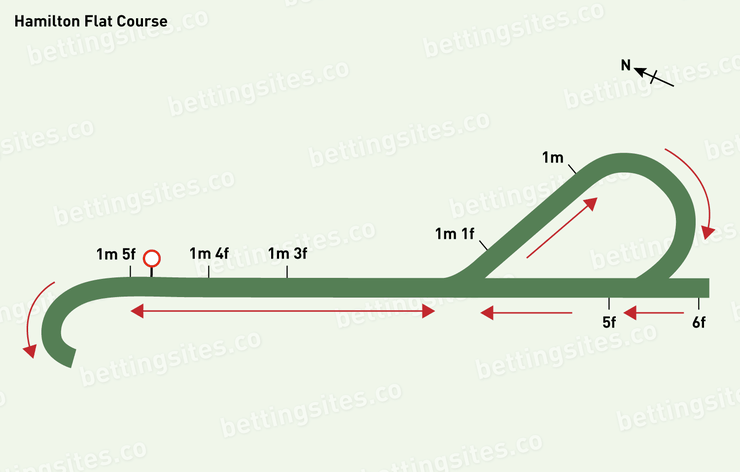 The configuration of the course at Hamilton is somewhat unique, consisting of a straight section, containing the 5f and 6f starts, with a right-handed loop then beginning around halfway up the straight and curving back around to re-join the track around half a furlong after the 6f starting point.

Looking first at the straight section of the track, this runs fairly steeply downhill for the first three furlongs, before then rising just as steeply almost all the way to the line – only really beginning to level off in the final half-furlong or so. That stiff finish is always something to bear in mind when making selections at this track, as runners with concerns over their stamina are often found out in the closing stages.

Contests over 1m65yds and 1m1f36yds begin on the loop section before turning right-handed and heading down the straight to the winning post. It is the races over 1m3f, 1m4f and 1m5f which are the most unusual, with the field over all three distances being required to initially travel the “wrong way” down the straight, before turning slightly left into the right-handed loop, and then coming back up the straight in the opposite direction to which they began. Over the 1m5f trip, the field actually passes the winning post in both directions.

With both the straight section of the track and the loop featuring pronounced undulations, and the turns being relatively tight, it is no surprise that a well-balanced runner is often required for success around here. It is also of vital importance that a horse can settle nicely and not travel too quickly during the downhill sections, as wasting energy early can prove costly on that stamina-sapping uphill climb to the line. Given the rather unusual layout of this course, any runner to have previously performed well around these undulations and turns is well worth a second look when picking out those bets.

The first thing to note is that on soft or heavy ground the runners will often gravitate towards the far rail, resulting in the high numbers being favoured. However, thanks to improvements made to the drainage system, genuinely soft ground is a rarity these days and as a result, this bias doesn’t crop up so frequently as in years gone by.

Overall, any bias on the straight course is marginal at best, with an analysis of 146 events held over the 5f and 6f trips showing win percentages of 8.4% for low, 8.8% for middle and 9.5 % for high draw runners.

All races run over a mile and further take in at least part of the loop section of the track. In these events, there does seem to be a slight bias towards those low-drawn runners who are able to stick to the inside around the bends. Across 162 races at trips of between 1m and 1m5f the win percentages returned were 10.9% for low, 9.9% for middle and 7.4% for high.

This can be a particularly difficult course at which to judge pace correctly, and as is often the case at tricky tracks, certain jockeys are more adept at getting the fractions right than others. In recent seasons up, Ben Curtis with a 22% strike rate and around £2.5o net win to £1 level stakes and Paul Mulrennan (18% strike rate, around £19 level stakes net win) have been the men to stand out from the crowd. Kevin Ryan’s 23% strike rate leads the way amongst trainers, but supporters of the Yorkshire handler would still have registered a level stakes loss of almost £3.50 over the last few years.

Possibly the simplest route here is to simply back the favourite in all non-handicap events. Doing so across the most recent seasons would have resulted in a strike rate of 55% and a healthy level stakes net win of almost £19.