Of Ireland’s 26 racecourses, the eastern venue of Bellewstown is notable both for being one of the most picturesque tracks in the land and also one of the most historic. Local papers the Dublin Gazette and Weekly Courier in fact first reported racing in the area way back in 1726, meaning that the sport has now been taking place in the region for the best part of 300 years.

Located high up on the hill of Crockafotha, around 35km to the north of Dublin in County Meath, the track affords spectacular views of the Mountains of Mourne to the north and the Irish Sea to the east, making the track well worth a visit for the scenery alone.

If you are planning a trip to Bellewstown races, the opportunities to do so are fairly fleeting, with the Boyne Valley venue being one of the most infrequently used of all the Irish courses. The rural track, in fact, stages a total of only five race days all season – consisting of a three-day festival in July and a two-day meeting in August. This relative scarcity of meetings does lend more of a special occasion atmosphere to the race days, and both summer meetings are regularly very well attended.

A dual-purpose venue, Bellewstown is able to stage both races on the flat and those over hurdles – but not fences. Most meetings at the track tend to feature a mixture of flat and jumps contests and as such, certainly don’t lack when it comes to variety.

Both the flat and National Hunt contests take place on the same left-handed oval of around 1m1f in circumference, consisting of two fairly sharp bends and two long straight sections. An undulating affair, with cambered bends, tight turns and road crossings, the course places significant demands upon the balance and adaptability of the contenders. Slightly undulating almost throughout, the back straight runs generally downhill, whilst the run-in of around three furlongs rises steadily to the line and is by some way the stiffest section of the course.

With racing at the track taking place exclusively during the summer months, good or good to firm ground is the norm around here. But thanks to the venue’s very efficient watering system, conditions very rarely get any quicker than that.

Both boasting a 24% strike-rate over recent seasons, and respective level stakes net wins of over £28 and almost £10, flat jockeys Declan McDonogh and Gary Carroll have been the men to follow in the saddle. With a strike-rate of over 30% and a level stakes net win of more than £11 over this period, it is the name of Michael Mulvany which stands out amongst the flat trainers.

Again, looking at the past few seasons Jonathan Moore and Darragh O’Keefe have the best records amongst the National Hunt jockeys. Moore boasting a strike rate of nearly 30% and a level stakes net win of almost £33; and O’Keefe winning 25% of his races to reward level stakes supporters with a net win of more than £47.

With a strike-rate of 30% over a five year spell, anything from the yard of Willie Mullins is always worth a second look, although backing all of his runners would still have returned a small level stakes loss. At 20% Gavin Cromwell can’t match the strike rate of Mullins over this timeframe but has rewarded supporters with a level stakes net win of nearly +£18.

Rather unusually, it has been relatively easy to record a net win in the flat handicaps around here. Simply backing the jolly in all such events, in recent seasons up, would have returned a level stakes net win of over £11.

The favourite should possibly also be your first port of call in the bumper events. There have only been 11 of these National Hunt flat races take place at the track over the past five seasons; but no fewer than eight of these have been claimed by the market leader – enough for a level stakes net win of almost £8.50. 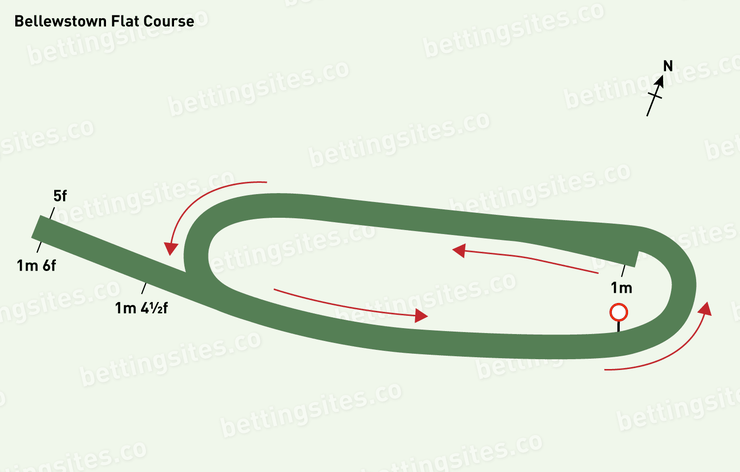 In addition to the main oval section of the track, the flat course also features a chute which runs into the home straight and contains the five furlongs and 1m6f starting points. Events over a distance of a mile commence at the start of the back straight, whilst the 1m4½f contests get underway at the beginning of the home straight.

The five furlong sprint contests at Bellewstown can be particularly tricky affairs, as the chute on which the starting point is located lies high up on the hill, meaning that runners are required to run pretty steeply downhill in the early stages. The sprint course also veers left-handed prior to joining the main oval. This also means that the runners are on the turn for a significant portion of these five furlong events.

Those who like to race prominently and are well-balanced tend to be favoured at Bellewstown. This edge is more pronounced over the shorter distances; over the longer trips, runners have more of an opportunity to improve their position on the long straight sections of the track.

There is however no corner-cutting in the contests over one mile which begin in the back straight and take in the full bend into the home straight. In such events, low numbers hold the edge. This edge diminishes over the longer trips on the round course, with the long straight sections of the track serving to even out the bias. 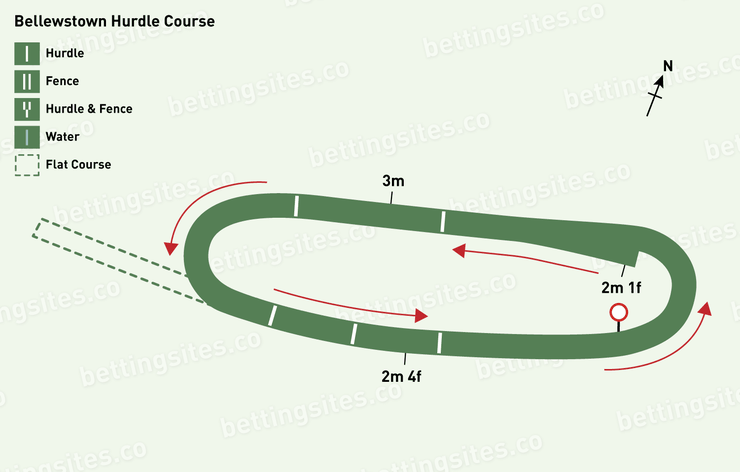 As mentioned, the National Hunt fare at the track consists only of hurdle and bumper races, with not a fence in sight. The hurdles course features five standard obstacles per circuit, two of which lie in the back straight, with the final three being located on the stiff uphill three furlong run-in.

Although taking place on the same oval course as used for the flat contests, it tends to be the outer portion of the track which is used in the hurdle events – essentially moving the inside rail outwards. This has the effect of creating a course which is identical in configuration to that used on the flat, but for the fact that the bends aren’t quite so tight. This, together with the fact that both the back and home straight sections are often taken more than once in the longer hurdle races, helps to balance out the advantage enjoyed by the handier, nippier types on the bends. Overall Bellewstown is viewed as being a very fair jumps track, with no strong pace bias.