Situated on its very own island between the main channel of the River Thames and the Clewer Mill Stream backwater, Windsor Racecourse must be one of the most uniquely located in the whole of British racing – a track which can conveniently be reached by land, air or water! This beautiful Berkshire venue is also right up there with the most picturesque of courses, nestling in 165 acres of beautiful countryside and overlooked by the historic Windsor Castle. As a result of that proximity to the regal residence, and consistent Royal patronage over the years, many fans refer to the track as Royal Windsor.

The roots of the equine entertainment in the area also boasts strong links to the monarchy, with Windsor Great Park having been enclosed and used as a Royal Hunting ground fully 700 years ago. Racing came later, allegedly first appearing during the reign of Charles II in 1682, but it wasn’t until 1866 that this track first opened at its current Rays Meadow site. Despite that rich heritage, Windsor offers a thoroughly modern race-day experience, making the most of its location only 22 miles from the hustle and bustle of London to draw in the crowds. 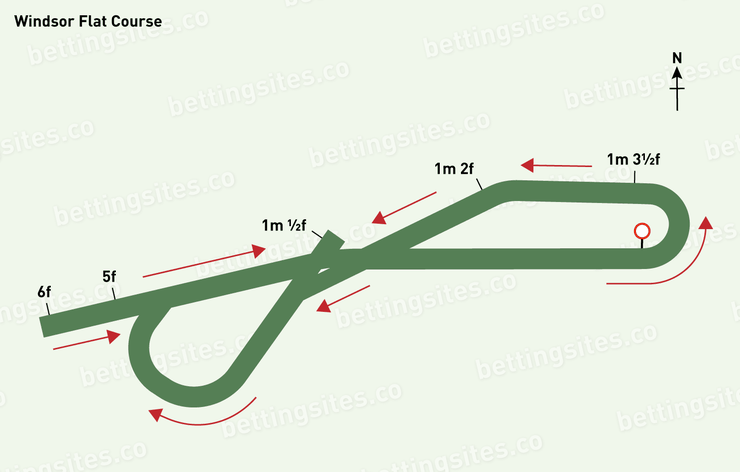 Not only is the small island location of Windsor fairly singular, but the track is also in a very small minority in terms of its layout. Together with Fontwell Park, Windsor is in fact one of only two figure of eight tracks in the whole of British racing – and the only flat racing course to be configured in such a manner.

A full circuit of this perfectly flat track measures a shade over 1m4f and features both right and left-handed turns. However, it is only over the longer distances of 1m2f and 1m3½f – which start on the first loop before crossing into the second – that the field is actually required to turn in both directions. Events over a distance of 1m½f begin via a short spur running directly into the second loop, before turning right-handed back around to the home straight.

Sprint contests over five furlongs and six furlongs, meanwhile, take place entirely in the straight, with a one-furlong spur containing the six-furlong starting point. Note that the word “straight” isn’t entirely accurate here, as this section of the track actually kinks markedly right-handed around three furlongs from home, at the point where the two loops intersect.

Of the two turning sections of the track, it is the second, right-handed loop that is by far the trickiest – earning the nickname “carnage corner”. Should one of the leaders slow up around this bend, it tends to have something of a domino effect, as the turn is really too tight for those in behind to attempt to overtake around the outside. A good strategy for those aboard the pacesetter is actually to kick into the bend and potentially poach a lead should those in behind experience traffic problems.

At first glance, Windsor would appear far more suited to the nimble, agile type of performer due to those significant turning sections. Whilst that is true to an extent, it should be remembered that runners over all distances are faced with a run-in of close to five furlongs which – being almost straight and completely flat – is ideal for the long-striding gallopers to build up a head of steam and come with a long late run. When taken together, the turns and straight sections just about balance each other out, creating a track that is far fairer than many believe.

With all events over a mile and further featuring a turning section soon after the start, logic would suggest that those drawn low against the rail would hold the edge. This time the data does follow the expected pattern, with the 939 events to take place on the round course over the 10 years in question returning figures of 12.4% for low, 11.9% for middle and 11.2% for high, a bias which increases to 13% low, 12.2% middle and 10.5% high on soft or worse going.

One of the more unusual tracks in the country in terms of its layout, Windsor is unsurprisingly a track that places significant demands upon jockeyship. As such, it is always worth paying close attention to those riders with a solid previous record at the track. When looking at the results over recent seasons, Tom Marquand has rewarded supporters with a 16% strike rate and a whopping net win of over  £55 to £1 level stakes, whilst Silvestre De Sousa (around £38 level stakes net win, 29% strike rate) has also been well worth following. Wiltshire handler Richard Hannon is one of the most frequent visitors here, and it is he who tops the trainers’ table with an 18% strike rate and a level stakes net win of almost £14.

It has been possible for favourite backers to make a net win over the recent period in question, but only if they had stuck to the two year old races. Backing the jolly in all juvenile contests returned a net win to £1 level stakes of over £14, whilst doing so in all events for runners aged three and above would have returned a loss of around £47.

A dual-purpose venue for the vast majority of its lifespan, Windsor is a flat only racecourse these days, with the National Hunt action having been scrapped in December 1998. Operating exclusively during the warmer months of the year, the track crams in a total of 27 fixtures between April and October, the majority of which are held in the evening – including 15 consecutive Monday night fixtures between May and August. And there’s a fair bit of quality to go with the quantity too, with a total of five contests at Listed level or above spread throughout the campaign, headlined by August’s Group 3 Winter Hill Stakes.