Located around one mile from the town of the same name, this picturesque County Down venue is one of only two racecourses situated in Northern Ireland. Whilst officially falling on British territory, racing in Ireland operates on an All-Ireland basis, meaning Downpatrick falls under the umbrella of Horse Racing Ireland (HRI).

A region steeped in equine history, racing has taken place in the Downpatrick locale since way back in 1685, with legendary foundation stallion the Byerley Turk amongst those to have strutted his stuff in the area in years gone by. The present-day course is only a few miles from that original 1685 venue and has itself now been in operation for over 150 years. A dual-purpose track until as recently as 2009, these days Downpatrick stages National Hunt racing only, with the Ulster National being the highlight of a nine-fixture season which runs from March through to October. 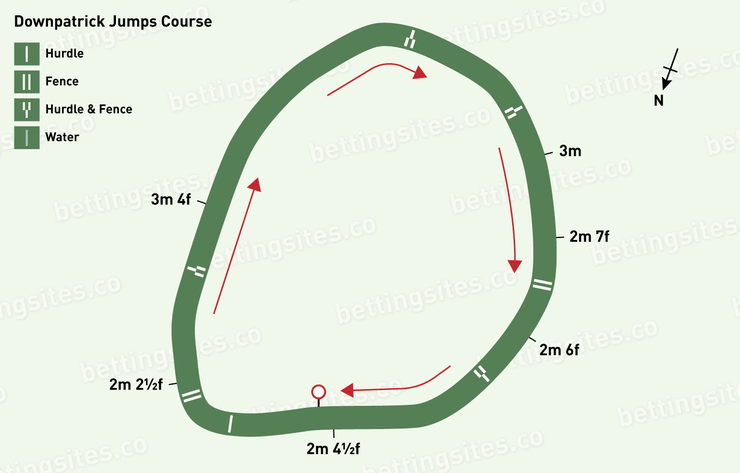 The track layout at Downpatrick is best described as being right-handed, narrow, and oval in nature, leaning more towards the circular in that there are few long straight sections. The most notable aspect of the course though, and one which makes it distinct from many other National Hunt venues, is just how undulating it is, with sections of the course having been variously likened to a rollercoaster and falling off a cliff.

Taking in a 1m3f circuit, runners will first be greeted by the steepest downhill portion of the track which begins immediately following the winning post. It is this section which is likened to stepping over the edge of the cliff and is one of the most dramatic downhill sections not only in Ireland but in all of racing. This downhill aspect continues until after the second fence, beyond which point the field face an initially slight incline which increases in severity in the run-up to the third fence. Another downhill section comes next before the turn in to the one furlong home straight which is uphill all the way to the line. You can certainly see where that rollercoaster analogy comes from!

Chase contests take place over distances of 2m2½, 2m5½f, 2m7f and 3m4f and feature six fences per circuit, one of which is an open ditch. The fences themselves are considered to be amongst the easiest in Ireland, with the most difficult element coming by virtue of the fact that many are taken at an angle rather than head on. Due to their proximity to one another before the turn for home, it is the final two fences which are viewed as the track’s trickiest, and whilst there aren’t too many jumping errors around here, if there is to be one it will most likely come here.

The hurdles track lies on the inner portion of the course and stages contests over distances of 2m1½f, 2m2f, 2m2½f, 2m5½f, 2m6f and 2m6½f. Featuring five standard flights per circuit, the main difficulty of the obstacles again comes through the need to tackle the hurdles at an angle.

Given its lack of significant straight sections and continuously undulating nature, this is not a track which is particularly suited to the long-striding, galloping type of performer. The more nimble and well-balanced runners tend to be favoured here, particularly those who like to race up with the pace, with frontrunners doing particularly well over hurdles. Do be aware though that the bias towards the prominent racers is common knowledge, which can on occasion mean that they go off too quick in front as several runners vie for the lead.

Due to its turning nature, Downpatrick may not initially appear to be a particularly demanding track from a stamina perspective, and were it flat that would no doubt be an accurate assessment. However, all those ups and downs and that significant climb to the line mean that runners need to see the trip out well if they are to prevail around here. Overall – and in common with many of the more unique courses – previous course form can be worth its weight in gold around what is widely regarded as something of a specialist’s track.

Downpatrick is undoubtedly also one of the trickier tracks for the riders, with a good judgement of pace, and knowing where and when to get a breather into their mount being essential to success. Looking at the past few seasons of results, two men who have demonstrated the necessary skills better than most are Davy Russell and Sean Flanagan – Russell boasting a 28% strike rate and net win of over £17.50 to £1 level stakes, and Flanagan sitting on f 20% SR and over £7.40 level stake net win.

Turning to the trainers, Grand National-winning handler Noel Meade has been the man to follow over this recent period, with an impressive 30% strike rate and an almost £18 level stakes net win. Another famous Irish racing name it has paid to follow is one of the biggest owners in the game, JP McManus. Those to have lent their backing to those famous green and gold silks have been rewarded with a 22% strike rate and level stakes net win of nearly £19.50.