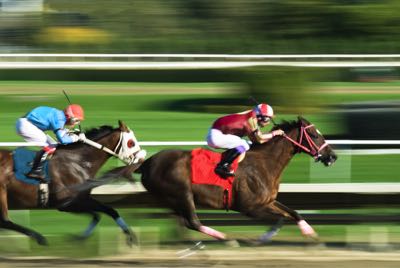 Having first opened its doors to the public back in 1920, the County Meath venue of Navan Racecourse has now been providing Irish racegoers with quality flat and National Hunt action for a shade over 100 years. Located in Proudstown and still referred to by its original name of Proudstown Park by some racegoers, this hugely popular track lies only around 30 miles to the north-east of the bustling capital of Dublin.

Staging a total of 17 fixtures over the course of the season, it is the National Hunt events for which the course is best known. Staging nine Graded contests in total, highlights include the Boyne Hurdle, Fortria Chase and Navan Novice Hurdle which was a Grade 1 affair until as recently as 2014. Of course, it’s not all about the jumps. There’s plenty to whet the appetite of flat fans here too, with the Group 3 Vintage Crop Stakes regularly attracting some of the top stayers in the game. Whether attending a flat or a jumps fixture, racegoers can expect an excellent race-day experience, with the track having benefited from significant upgrades to the facilities during the 1990’s and again in 2014.

Both the flat and National Hunt events take place on the same left-handed track at Navan. Somewhere between a rectangle and an oval in configuration, this wide course features broad sweeping bends and long straight sections, and as such can be considered a galloping track under both codes. One circuit of the course measures 1m4f, with the runners faced with a long home straight of three and a half furlongs upon leaving the final bend. With the final two furlongs of the run-in climbing steadily uphill, Navan is renowned for its stiff finish.

Thanks to an extensive watering facility, Navan can be counted upon to avoid firmer ground during the summer months. Things are rather different in the depths of winter though when, thanks to the relatively slow draining subsoil, the course can become very testing indeed – further calling the stamina of the contenders into question, at what is already a stiff track.

Navan certainly isn’t the trickiest of courses to ride in relation to its layout but there are still a few factors that the jockeys need to bear in mind. One of the most critical of these is the importance of getting a breather into their mounts down the back stretch in order to save a bit for that gruelling home straight. As ever there are those riders who fare better than others at this track, with Colin Keane’s 18% strike rate and net win of £6.87 leading the way amongst flat jockeys in the past few seasons, and Paul Townend (17% SR, £2.67 net win) topping the pile over jumps.

When looking at the trainers, there have been no names to really stand out in the National Hunt sphere over this period but Joseph O’Brien (14% SR, £18.96 net win) and in particular Jim Bolger (14% SR, £40.75 net win) have been well worth following on the flat. 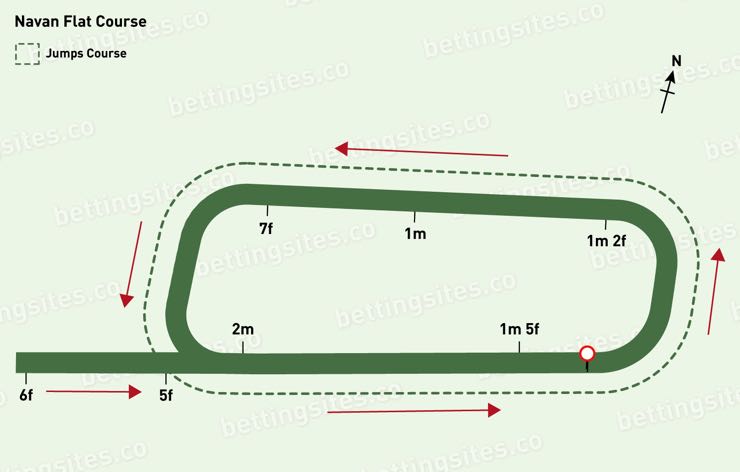 In addition to the main round section of the course, the flat layout also features a two and a half furlong chute which runs directly into the home straight. This chute enables sprint contests over five furlongs and six furlongs to take place on a straight track, with all other races, over distances of seven furlongs, 1m, 1m2f, 1m5f and 2m beginning on the round course.

Be it over the longer races or the sprint trips, one of the key factors for success is the ability to truly stay the distance, as that punishing final two furlongs will ruthlessly expose any stamina limitations. Other than favouring the stronger stayers though, Navan is widely considered to be one of the fairest courses in the whole of the British Isles, with no discernible bias either in regard to the draw, or favouring one style of runner over another. At Navan the best horse on the day usually wins, with hard luck stories being few and far between. 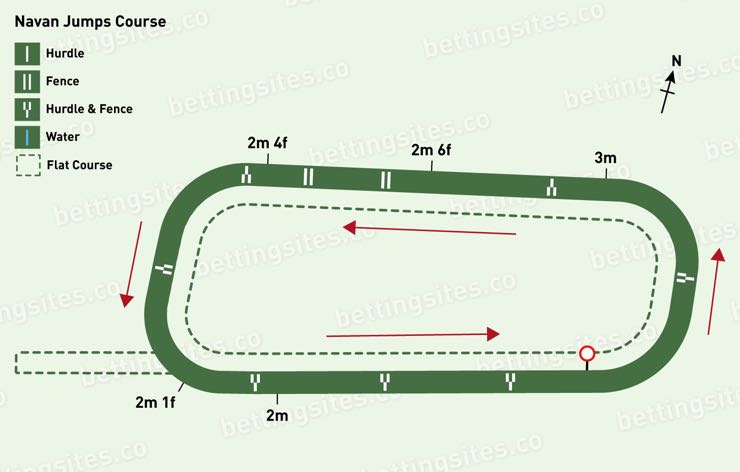 Both chase and hurdles events take place on the same round course as used for the flat events, with the chase contests utilising the outer portion of the track and the hurdles the inner. The hurdles course is therefore ever so slightly sharper than the chase track but, so wide and sweeping are the bends around here, that it really makes no noticeable difference.

Those tackling the chase course must safely negotiate nine stiff but fair fences per circuit, consisting of seven plain obstacles and two open ditches. Each of the ditches are sited on the turning sections of the track, with four obstacles in the back stretch and the final three in the home straight, followed by a run-in of close to one furlongs.

Most riders consider the first obstacle down the back straight and the second last to be the trickiest at the track, whilst the fourth last can catch some runners out due to coming immediately prior to a bend.

Events over the smaller obstacles feature seven flights per circuit. The hurdles are occasionally moved in order to provide better racing ground but the general layout features two in the back straight, one on each of the bends and a final three in the home straight, with a run in of again around one furlong following the final obstacle.

Whether over hurdles or fences, and in common with the flat races around here, stamina is one of the key components to look for when making your selections, and particularly so should the ground be riding on the soft side.