For 364 Days a year, the strand of tidal beach at Laytown on the East Coast of Ireland has little to distinguish it from the other picturesque shorelines of the Emerald Isle. However, for one day only, in early to mid-September each year, the patch of land does look very different indeed. For it is at this time of year that this County Meath venue, lying around 45km to the north of Dublin, is transformed into something of a pop-up racecourse; with the erection of a temporary parade ring, Grandstand, bookies pitches, hospitality marquees and everything else you would expect from a day at the races.

First staged in 1868, when featuring alongside the Boyne Regatta, this meeting is now the only officially recognised fixture to take place on a beach in Britain and Ireland. Offering one of the most unique racing experiences to be found anywhere in the sport, the one-day event draws in punters from far and wide, with between 5,000 and 10,000 spectators cramming into the beachside field to watch the action unfold each year. 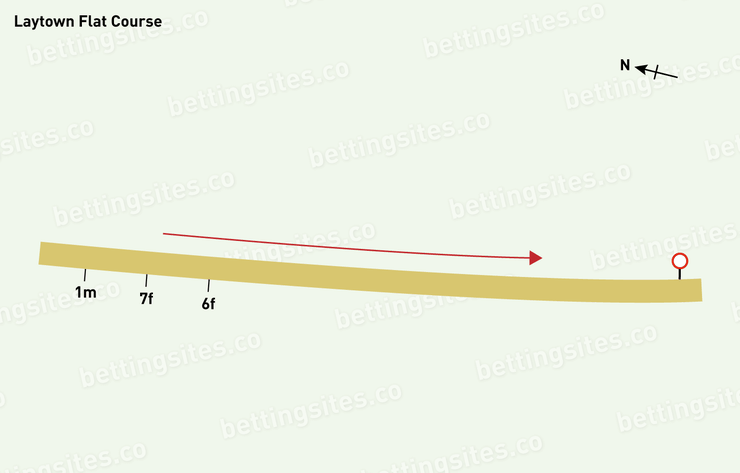 The switch to the straight course has massively improved the safety aspect of this fixture but has dramatically affected the distances over which races can take place. All events at Laytown are now held on an almost dead straight and level course, over a distance of either six furlongs or seven furlongs. Having utilised flag starts in the past, conventional starting stalls have been used in all races here since 2015.

Another of the safety measures brought in since 1994 has been to lower the cap on the maximum number of runners. As such, fields tend to be on the smaller side here, with a maximum field size of 10 runner being the norm at this meeting.

When looking at the type of runner favoured, it does seem that it is particularly hard to make up ground from behind on the Laytown sand, with front runners and prominent racers holding a definite edge. The majority of the jockeys report the wet sand as riding pretty firm, which should in theory favour runners suited by a fast turf or an all-weather surface.

There are some who believe a high draw to be an advantage around here but this opinion should perhaps be viewed with a degree of caution, due to the variations in the sand from year to year, and the fact that the exact location of the course also varies annually.

Being such an infrequently used track, the sample size of races is that much smaller for those looking to spot a profitable trend. Any patterns, therefore, don’t hold quite the weight as at other venues, but there are nevertheless a few names to stand out amongst the trainers and jockeys. Lisa O’Neill boasts a 50% strike rate and profit of over £4.50 to £1 level stakes across recent seasons, whilst Classic winning rider Colin Keane (25% strike rate, over £7 level stakes profit) also seems to enjoy himself on the beach. Gabriele Malune meanwhile is a perfect two from two in rides here to date. Adrian McGuinness (16% strike rate, around £12.50 profit) catches the eye amongst the trainers, whilst Sarah Lynam, Ivan Furtado and Richard John O’Brien are all unbeaten here, albeit from a total of only five runners between them.

Again, the sample size is only very small, but the favourites have done well in non-handicaps of late – five wins from nine such races over the last few meetings, returning a level stakes profit of almost £6 to jolly backers.

The stretch of shoreline over which the Laytown races take place measures close to three miles. Rather than using the same patch of sand year after year, officials decide in advance of each meeting which section of the coastline is most suitable to stage the fixture in the current year.

Previously, races were held over trips of up to two miles, with some distances requiring the field to negotiate a turn. However, following an unsavoury incident in 1994 – in which a horse veered into the crowd – a major review was undertaken. Following this review, the bulk of spectators now view the action from a beachside field rather than from on the beach itself and all races are held on a straight course marked by traditional white racecourse barriers rather than flagpoles. The meeting is now also restricted to the more experienced jockeys, with any form of headgear being banned.