There are a total of 59 racecourses located on the British mainland – only three of which are situated in Wales. Joining Ffos Las and Chepstow in that trio of tracks is the rustic course of Bangor On Dee. Lying just across the border in the north of Wales, and a little to the southwest of the village of the same name – not the city of Bangor which is around 70 miles away – the course has the somewhat dubious distinction of being the only racecourse in Britain which does not possess a grandstand.

That lack of an imposing home for spectators only really serves to add to the rural appeal of this venue though, with the track affording excellent views over the rolling Welsh countryside. Racegoer’s aren’t short-changed in terms of facilities either, as despite not possessing a grandstand, the course does boast the all-important bar and restaurant facilities.

A National Hunt-only course these days, racing has taken place at this Deeside venue since back in 1859. The track currently stages in the region of 15 meetings over the course of its season which, whilst running all throughout the year, does unsurprisingly tend to be more heavily weighted towards the autumn and winter months.

A real countryside venue, Bangor does also have an additional point to point track which lies inside the main course and races right-handed. Whilst that is well worth a look for fans of the amateur action, we will nevertheless be focussing on the National Hunt course proper here. 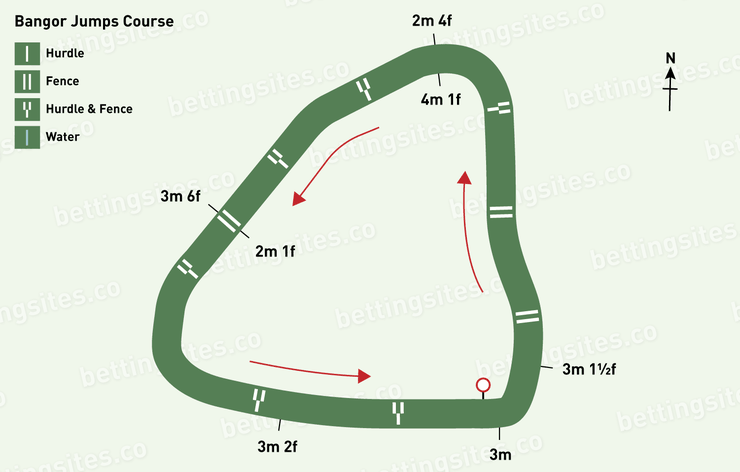 A sister rack to the spherical Roodee of Chester which lies just across the border, Bangor isn’t quite so circular as that flat racing venue. It isn’t too far off it though, with the runners turning left-handed for a significant portion of its 1m4f circumference.

Viewed from above, the track is actually more of a rounded triangular shape rather than a circle. The three points of the triangle see the course turn fairly sharply left-handed, with the most severe of these bends being the paddock turn, which certainly does rival those bends to be found at Chester. The turns are the most demanding aspects of a track which is fairly flat throughout and features only the most minor of undulations. It doesn’t provide the sternest test of stamina either so is a great course for young horses trying to gain some experience.

Whether on the hurdles or chase track, races at Bangor tend to be truly run affairs, with the turning nature of the course seeming to help nimble front-runners maintain their gallop. This factor, combined with the relatively undemanding nature of the track, means that the course is viewed as being one of the faster National Hunt venues in Britain – especially when the ground is riding on the quick side. That said, given the location in wet North Wales, this is not something that horses have to contend with all that often.

In general the track is thought to favour smooth travelling, agile sorts who are able to race up with the pace, rather than the more long striding galloping type of performer who may need time to build up a head of steam. Those who like to lead are also suited to Bangor’s configuration, although they still need to get the fractions right, as the 1½f run-in does provide some scope for those in behind to peg them back.

The hurdles track features six standard hurdles. Only one of these comes as they head out into the country, followed by three on the run back towards the home straight, and a final two in the home straight itself. Races take places over trips ranging from a minimum of 2m45yards up to a maximum of 2m7f7yards.

Due to the relative scarcity of the hurdles per circuit, in theory the more galloping type may be slightly more suited to hurdles contests around here than the events over fences, because of the increased time to get into a rhythm between obstacles. The turning nature of the course does still mean that the faster, nippier sorts tend to be favoured though.

The runners tackling the chase course will be faced with nine fences per circuit. The first three of these come as they head away from the winning post, with four on the run back towards the home turn, and the final two in the home straight.

The fences themselves aren’t testing when compared to the championship style of obstacles seen at the Cheltenham Festival for example, but are slightly more difficult than those to be found at many of the other “smaller” courses in the land. That said, this is still a relatively straightforward jumping test, with the two open ditches being the only slightly tricky obstacles.

The relatively high number of fences per circuit at Bangor, together with their generally straightforward nature, make the track a popular port of call for those looking to get some experience into their more promising novice chasers, and as such it is not unusual to get an early sighting of a future star around here.

Chase contests at Bangor take place over trips ranging from a minimum of 2m1f77yards to a maximum of 4m137yards. The biggest event of the season is the Anne Duchess of Westminster Memorial Handicap Chase which takes place in November each year and offers £26,000 in total prize money. That relatively modest sum gives you an idea of the standard of action to expect here but of course that is no barrier to a brilliant day at the races.

The favourites have a mixed record overall at the course, but do seem to do well in non-handicap chase events. Over the past five years we have seen the market leader post an impressive 64% strike rate in such contests, returning a level stakes net win of over £8.

Again, looking at the past five years, Brian Hughes’ 1 in 4 strike rate leads the way amongst the riders. That is enough for Hughes supporters to have bagged a +£10 level stakes net win over the period. William Kennedy is another man to note. The young rider’s near 20% win rate doesn’t match that of Hughes, but his level stakes net win of around £44 is particularly impressive suggesting he has seriously outridden his odds.

Based just across the border in Cheshire, Donald McCain is a trainer who is frequently represented at Bangor. And he does pretty well too, having registered a 22% strike rate and a whopping +£80 level stakes net win in the past five years. Henry Daly is another name to note, having posted a strike rate of over 25% and a level stakes net win of nearly £49 over this same period.