Few nationalities love their racing quite as much as the Irish, with the Emerald Isle boasting the highest racecourse to population ratio in the world. With close links to training and breeding operations, County Kilkenny holds a prominent spot on this racing landscape but posses just one racetrack, and it goes by the name of Gowran Park.

First opened back in 1914, and located close to the nearby village of Gowran, the track stages both flat and National Hunt action across 17 meetings which run throughout the year. A hugely popular track with the punters, the course claimed a place in the history books when becoming the first Irish venue to provide a racecourse commentary in 1952.

In terms of quality, the National Hunt events at the track tend to be a notch above the flat offering, with highlights including the Grade 2 races, the Galmoy Hurdle and the Red Mills Chase, in addition to the course’s most popular contest of the Thyestes Handicap Chase. September’s Group 3 Denny Cordell Lavarack Fillies Stakes is the pick of the flat action.

Both the flat and National Hunt events take place on the same track at Gowran Park. Right-handed, broadly oval in shape and around 1m4f in circumference, the course features one fairly sharp bend leading from the home straight into the back straight, with the turn back around into the home straight being more gradual.

Containing two relatively long straight sections, this is an essentially galloping track but does feature fairly pronounced undulations. Climbing steadily throughout the back straight, the runners then come fairly steeply downhill on the turn into the home stretch, before facing a testing three furlong uphill run to the line. Given the stiffness of this finish, it is important to look for runners who truly stay the trip, particularly when the ground is riding on the soft side.

The now-retired Ruby Walsh is way out in front in the National Hunt jockey standings at this track over the last few seasons with no other rider coming close to matching his impressive 44% strike-rate. Of those who are still plying their trade in the saddle, it is David Mullins who boasts the strongest stats over this period, registering a 20% strike rate and a net win to £1 level stakes of around £3.50. Willie Mullins’ 31% strike rate over jumps is impressive, but supporters of the multiple Irish champion would still have been handed a level stakes loss of over £24.

Turning to the flat, there are few names to stand out amongst either the trainers or jockeys, with legendary handler Aidan O’Brien (22% strike rate, around £1 level stakes net win) being the only man to sneak a net win. 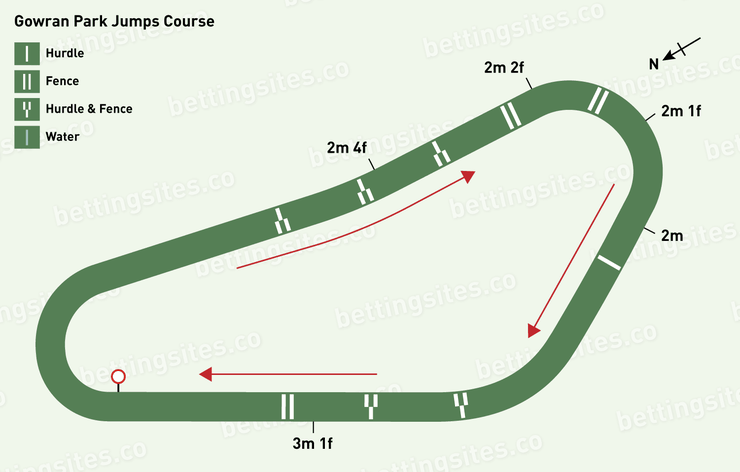 The chase track utilises the outer portion of the course and features seven fences per circuit, including a pair of open ditches. The four obstacles in the backstretch come up pretty quickly after one another and can cause problems, particularly for those who don’t meet the first of these fences on a good stride. The final three fences then lie in the home straight. Due to its proximity to the bend, it is the first of these that most riders generally consider the trickiest. Having negotiated the final flight, the runners then face a run-in of only around a furlong, leaving little time for those looking to come with a late effort.

Situated on the inner portion of the course, the hurdles track is marginally tighter than the chase track. Featuring an even split of hurdles – three in the back straight and three in the home straight – it is again the third obstacle from home which is most likely to cause an error, due to it being almost upon the runners as they come out of the bend.

A good galloping track, the National Hunt course again seems to suit front runners, but those two extensive uphill sections do place a premium on stamina, with an ability to stay the distance being a must on soft or worse going. 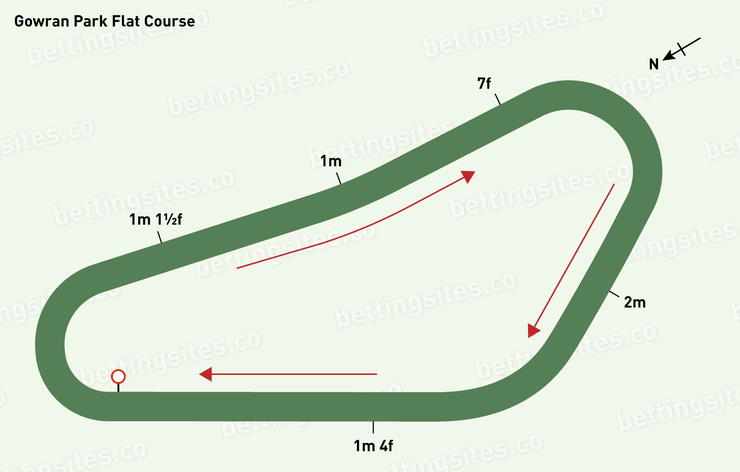 In common with a few other Irish courses – most notably Galway – there are no sprint events held on the flat at Gowran Park, with the intermediate distance of 7f being the minimum trip at the track. Other contests take place over distances of 1m, 1m1½f, 1m4f and 2m.

When looking for likely winners around here, pay particular attention to those who like to take the bull by the horns and set the pace. Annually boasting one of the highest strike-rates for front runners in the whole of Irish Racing, anything left alone out in front – being able to get a breather in during the downhill sections, before kicking again in in the straight – can prove very tough to reel in. This bias towards the prominent racers is particularly evident over the shorter distances.

In terms of the draw, Gowran Park is considered to be one of the fairer tracks in Ireland. Part of the reason for this may be the fact that the majority of the starting positions give runners ample time to get into position before being faced with a bend. The one exception to this being the 7f events which begin just before the bend into the home straight. Whilst there is some evidence of a bias towards those drawn low over this trip, it is only minimal at best, and often only of benefit to those runners who like to make the running.