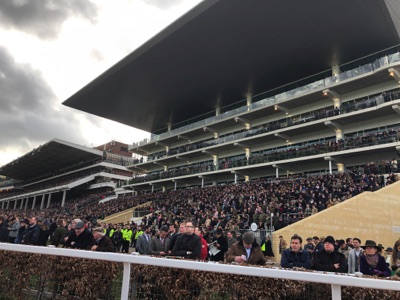 Cheltenham Racecourse, by rights, should have pearly gates at its entrance. The reason: it is simply heaven to the thousands of fans who flock to every single fixture, whatever the racing itinerary. It is without doubt, the home of National Hunt racing. Cheltenham does not hold minor meetings, from New Year’s Day to the November meeting, the racing is competitive, exciting and challenging to the best equine stars on the planet. Anyone growing up wanting to be a jockey has one dream; that dream is to win a big race and more importantly, to win a big race at the Cheltenham Festival in March.

Cheltenham is situated at Prestbury Park, a short drive from the town centre on Evesham Road. By rail Cheltenham Spa is the nearest station and has regular trains from Birmingham New Street. Public buses are then an option to get to the racecourse. Arguably though, nothing other than the walk from the town centre to the track get the hairs on the back of your neck standing to attention, as you take in the ambiance of the place and feel the excitement building on race day.

Of the three distinct courses at Cheltenham, the New Course and the Old Course are both left-handed, run alongside one another and are very similar. The Cross Country Course, which runs mainly within the other courses, is a different kettle of fish altogether.

In distance this course measures around a mile and a half to a circuit. When betting here, bear in mind that this is much more of a speed test than the New Course tends to be. The Queen Mother Champions Chase, the Supreme Novices’ Hurdle and the Arkle show that fact very well.

The Old Course suits hurdlers that have a high cruising speed and can comfortably set a decent pace between flights. The hurdles on the Old Course are more evenly spaced out and generally are more like other conventional courses than on the New Course. The run-in however, is still a gruelling uphill climb to the finish line but, it is possible to get some momentum to carry you up the hill from the final flight, at least the best horses who compete here.

The chase track on the Old Course features fences that are stiff and demanding and that clearly plays to the strengths of horses that can jump well and consistently. The fences are well spaced out and horses have plenty of time to prepare, therefore races can often become tactical in nature. Of the jumping tests, the third last is arguably the toughest fence at Cheltenham. It is a downhill plain fence taken at speed and it is where horses can struggle, especially on the landing side. Statistics show it to have more fallers than other fence at the course. The final four furlongs are all uphill and the climb to the winning post is grueling. Surprisingly, not as many races as might think change dramatically on the climb to the line.

Over hurdles on the New Course, in the final seven furlongs, the horses are asked to only negotiate obstacles twice. This means racing often does not really tend to start to develop until this point. Horses that statistically do well on this course must stay the trip well, jump accurately and have the ability to dig deep under pressure. The run-in here is tough, uphill and demanding, as many an equine star has found out over the years.

The fences on this track are stiff and the course itself is somewhat undulating. Of the jumping tests, the fourth last, an open ditch which is taken downhill, often causes problems. Statistics show it to have more fallers than other fences. There are also two fences in the straight. It is imperative that these two obstacles are met on a perfect stride and jumped boldly.

As the New Course is also more of a stamina test, races on a regular basis are won by hold-up horses who make their move at precisely the right time. Making all the running is not impossible, but it takes a special horse to do it. The horses that win here in the biggest races tend to have everything, and everything in abundance.

This course is only used three times in a season and was inaugurated in 2005. The obstacles are unique in their design. Banks, hedges, ditches, water and timber rails all present at some stage. An amazing fact about this course is that the fences are made from living, growing trees and shrubs that are trimmed for racing.

The feature cross-country race at the festival is run over three miles and six furlongs, where 32 different obstacles must be cleared. This discipline suits the older, wiser equine stars: a horse that thinks about each different task and is clever and agile. That is backed up by the fact that this track, generally gets the same course specialists turning up on most race days and generally running well (Tiger Roll being a prime example).

The Cheltenham Festival in March is the pinnacle of the sport. Gold Cup day often draws a crowd of 75,000 people and attracts a large contingent from Ireland. This four-day racing extravaganza exhibits everything which the sport has to offer. From the minute the white flag is raised at 1.30pm on the Tuesday for the Supreme Novices’ Hurdle, to the minute the last horse crosses the line in Friday’s finale, the Martin Pipe Handicap Hurdle, the excitement constantly takes the breath away. There is no roar in racing like, the Cheltenham Festival roar.

The Cheltenham Festival in terms of betting is as big as it gets in the sport. Speciality bets like, Irish-trained winners versus English-trained winners, top trainer and top jockey markets, winning distance markets, what the official ground will be, to name but a few, as well as numerous extra place terms… Cheltenham has it all. This along with the 10 miles of running rails that are used, the many hurdles and fences, and after that last person departs on the Friday after the action they leave behind a course that has approximately four million hoof prints.

All trainers and jockeys have a desire to win here, but in recent times Nicky Henderson has been especially successful along with top Irish rider Barry Geraghty, while Willie Mullins has saddled more winners than most over the years.