Of the five racecourses situated to the north of the border in Scotland, only Ayr, the home of the Scottish Grand National, is bigger than the venue of Musselburgh. Lying only six miles outside the capital city, and in a prime coastal location, the track formerly known as Edinburgh Racecourse is ideally situated to take advantage of the tourist market. Also in the vicinity of the River Esk in the Firth of Forth, this picturesque venue and annually attracts over 70,000 punters across its 28 fixtures split between flat and National Hunt action.

It hasn’t always been plain sailing for this track which opened for business in 1816, with the legalisation of betting shops in the 1960’s hitting the course particularly hard. It did survive though and ever since benefitting from £7.5 million in investment in the mid-1990s it has only gone from strength to strength, to the extent that the Millhill venue was awarded the title of Britain’s best dual-purpose racecourse in 2011.

As mentioned, this course stages both flat and National Hunt racing, both of which take place on the same track. Broadly in the shape of an elongated oval, this 1m2f, right-handed course features long straight sections and sharp corners, with the turn from the back straight into the home straight noted as being one of the tightest in the whole of British racing – although extensive cambering works to this section have made it significantly easier to navigate than in years gone by.

Tight though the turn for home may be, it is the alternate bend out into the back straight which has caused the track the most problems over the years due to the regular churning up of the ground. That problem is a thing of the past these days though as that section of the course was completely re-laid with an all-weather surface in 2012.

Lying so close to the coast, the surface at Musselburgh benefits from having a natural sandy subsoil, making it the quickest to drain of all the tracks in Scotland. Noted for its ability to beat the elements at times when other tracks fall foul, genuinely testing ground is something of a rarity around here.

There are no genuinely top-class events at this track, with the Scottish Sprint Cup and valuable Queens Cup topping the pile on the flat and the Triumph Hurdle Trial and Scottish County Hurdle being the best of the National Hunt contests.

Only a fair track for supporters of the market leader, jolly backers would have recorded a loss overall over this period but there have been a few race categories to sneak a net win. Those being the non-handicap events for runners aged three and older (40%, £1.66) and 2yo handicaps (40%, 9.02) on the flat and non-handicap chases (63%, £1.70) over jumps. 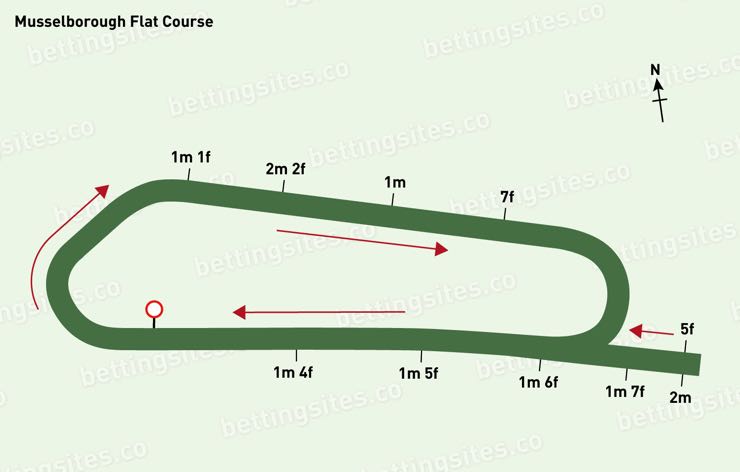 In addition to the main oval circuit which contains the starting points for races between seven furlongs and 2m2f, the flat course also features a spur that runs directly into the four furlong home straight. It is from this short chute that events over five furlongs and 2m begin, meaning that the contests over the minimum distance take place over an entirely straight sprint course.

Whilst the sprint track doesn’t have any discernible bias in terms of benefiting one style of runner over another, the events on the round course undoubtedly favour the more nimble type of performer, with long striding gallopers regularly struggling to maintain their momentum around those tight turns. Front runners can prove tough to peg back around here, for although the final one and a half furlongs is on a slight incline, this is generally considered to be an easy track.

The general consensus amongst regular racegoers at Musselburgh is that those drawn low are at a significant disadvantage over the five furlong sprint course. And this is an opinion that is certainly backed up by the stats – an analysis of 110 races over the minimum distance shows win percentages of 10.8% for high, 9% for middle and just 4.3% for low. Much of the reason for this is no doubt down to the fact that such races regularly see the field tacking over towards the stands side rail.

Over all other distances, the edge lies with those drawn low, with the win rates for 233 races at seven furlongs and beyond being 11.5% for Low, 8.4% for middle and 9.2% for high. This is not anything like so pronounced as the bias on the sprint course, but it is still something to bear in mind when picking out those bets. 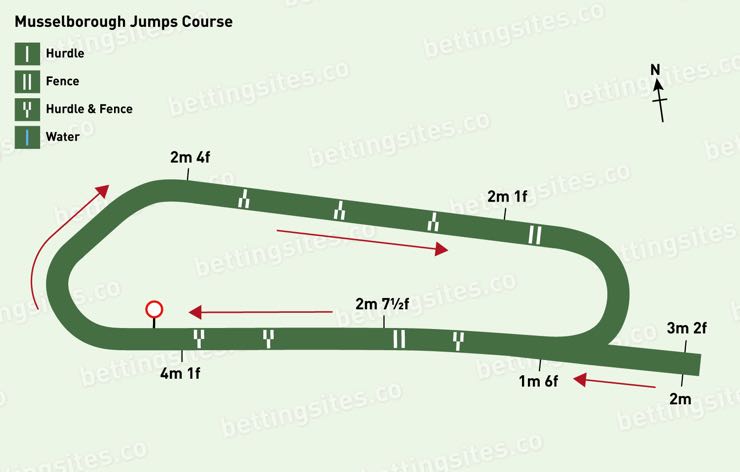 National Hunt racing didn’t arrive at Musselburgh until relatively late in 1987, but now makes up a significant part of the fixture list, with both hurdle and chase events taking place on the same course.

The chase layout features a total of eight fences per circuit, including two open ditches, with the obstacles being evenly split between the front and back straights. The fences themselves aren’t unusually stiff but they do claim a higher than average number of fallers, possibly due to the fact that many of the handicap events at the track are fairly low-class affairs.

Runners tackling the smaller obstacles meanwhile face six flights per lap, again evenly split between the two straight sections of the track. Over both hurdles and fences, runners face a run-in of only around 150 yards following the final obstacle.

Prominent racers are favoured in both National Hunt disciplines, although it is also crucial that such runners are sufficiently agile to handle the turns. The more galloping type of performer is at a definite disadvantage, as are hold-up performers. Do take note of any runner who is able to come from behind and win at this track though as, if they are able to successfully employ such tactics around here, there is a strong chance they will be able to do so elsewhere.