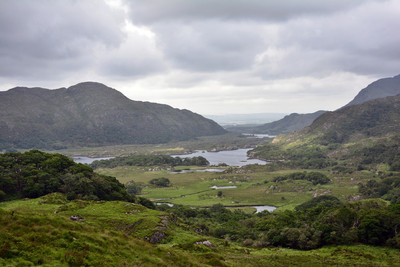 Located in County Kerry, with a backdrop featuring the serene Lough Leane, the 15th century Ross Castle and the mountainous Killarney National Park, it is with good reason that this track has the reputation of being not only Ireland’s most ascetically pleasing course but one of the most picturesque racing venues anywhere in the world. As is the case in the majority of this most racing loving of nations, the sport boasts deep roots in the Killarney locale. Tales of competitive action in the area hark all the way back to 1822, with events taking place at the current site since 1936.

A dual-purpose venue, which often mixes flat and National Hunt action on the same day, Killarney stages a total of 11 race days over the course of its season. Rather than being scattered throughout the year, these fixtures are compressed into just three festivals – a three-day meeting in May, and four-day events in both July and August. Very much a summer racing venue, the track’s biggest races come on the flat, in the shape of the Listed class duo of the Ruby Stakes and Cairn Rouge Stakes.

Both the flat and National Hunt action takes place on the same track. Left-handed and in the shape of something between an oval and a coat hanger, the course measures 1m2f in circumference and features only very minor undulations throughout. Generally considered to be a sharp track, the bend following the winning post is notably tight. Killarney also has the distinction of not possessing a home straight in the strict sense of the word, as the final three furlong section of the track veers slightly, but continuously, all the way to the line – a feature which makes it particularly difficult to pass on the outside on the run-in.

Despite the fact that all of its meetings are held during the spring and summer months, poor drainage at the venue can result in the ground becoming very soft, very quickly. The recommendation here is to leave it until as late as possible before checking the going conditions – it is by no means unusual for the description to change from good, to soft/heavy in a very short period of time.

Thanks to those tight turns, long straight sections, and the unique turning home straight, Killarney is a track that places a premium upon jockeyship. As such, it is well worth paying close attention to those riders with a proven record at the track. With a strike rate of 20% and a net win to £1 level stakes of over £45 over the past few years, it is Declan McDonogh who leads the way on the flat, with Colin Keane (18% strike rate, over £33.31 level stakes net win) and Chris Hayes (18% strike rate, around £26 level stakes net win) being other names to note. Mark Walsh (25%, over £24 net win) and Darragh O’Keefe (28%, almost £8 net win) have been the men to follow over jumps.

If in doubt at Killarney, these recent results suggest that one of the best strategies may be simply to back the favourite. This is especially true in the National Hunt sphere, with the non-handicap chases being the only race category to return a loss to supporters of the market leader. Surprisingly it is the competitive handicap contests that have fared best (35%, £17.75 net win). Things haven’t been quite so easy on the flat, but the jollies do seem to do well in the three year old races here (40%, almost £18 net win). 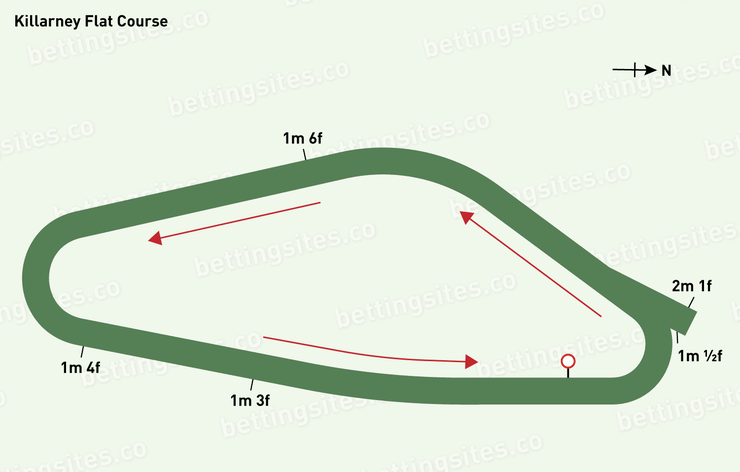 In common with a handful of tracks in Ireland, Killarney is not a course for the sprinters, with no events taking place at less than a mile. In fact the minimum trip here is 1m½f, with other events taking place over 1m3f, 1m4f, 1m6f and 2m1f. The 1m½f contests begin on a brief chute which runs into the back section of the track, with all other events starting on the round course proper.

In common with the majority of tracks that feature tight turns, there is some advantage to being drawn low and on the inside at Killarney. However, the course does also feature fairly long straight sections. This, in combination with the longer distance of the average race here, results in only a very slight edge towards those drawn low, which is only of any real significance in bigger fields when runners are in real danger of becoming trapped out wide. In terms of running style, this is generally a fair track, although prominent races do seem to enjoy an edge, especially on quicker ground. 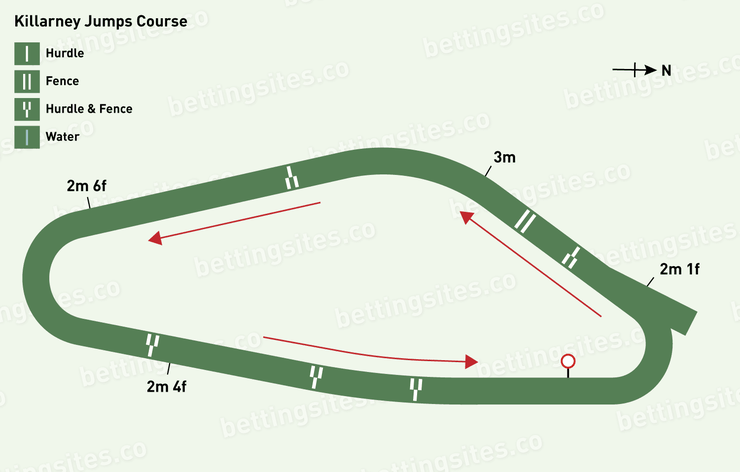 The chase course utilises the outer section of the track and features six fairly easy fences – two following the bend after the winning post, one on the run back towards home and three in the home “straight” itself, with a run-in of close to one furlong following the final fence. Due to the fact that they come on a slight bend, and that the first two are in close proximity to one another, it is the final three obstacles that are most likely to draw a jumping error from the competitors.

Situated on the inner portion of the track, the hurdles course is that bit sharper than its chase counterpart. Runners tackling the smaller obstacles are greeted with five flights of hurdles per circuit – one on the turn following the home straight, one on the run back towards home, and again three in the “straight” itself. The final two obstacles are situated close to one another, and also close to the winning line, leaving little time for runners to make up ground following the final flight.