Located in the West Sussex village of Fontwell, this picturesque venue benefits from being situated just on the fringes of the South Downs National Park, whilst also lying less than 60 miles from the hustle and bustle of London. This prime rural location, and easy accessibility, has proven to be a winning combination with racegoers, with Fontwell Park claiming the award for the best small racecourse in the South East on a seemingly annual basis.

Staging its first meeting back in 1924, the track – which is now part of the ARC racing group – will soon be planning its centenary celebrations. Looking back at those first hundred years, highlights include Her Majesty The Queen having her first racecourse winner with a horse by the name of Monaveen in 1949, and the course being used in the filming of the Dick Francis adaptation, Dead Cert in 1974.

A National Hunt only venue, Fontwell Park is nevertheless one of the busier tracks in the country, staging around 24 meetings throughout the year – other than during the month of July, which is the track’s designated month off. Held in February each year, the Grade 2 National Spirit Hurdle is the clear standout event of the season, whilst November’s Southern National is another hugely popular event with the fans.

Fontwell may be one of Britain’s smaller National Hunt venues, but it is formed quite unlike any other. Making maximum use of the land available, the course is in fact two partially overlapping tracks, with Britain’s only figure of eight chase circuit utilising the same bends as the more conventional oval hurdles course. In a further Fontwell kink, the bend leading from the backstretch into the home straight is a turf affair, whilst that which heads from the home straight out into the country boasts a Fibresand surface.

With the track staging racing all through the year, Fontwell generally experiences the full range of going conditions over the course of the season. Often relatively quick during the summer months, the poor drainage at the track regularly results in extremely testing conditions during the wetter winter period.

This has not been the track for supporters of the market leader to get rich of late, with every race category other than non-handicap chases showing a level stakes loss for favourite backers over the past few seasons. Even those non-handicap chase events haven’t been particularly lucrative, with an impressive 60% strike rate only translating into a net win of 82p to £1 level stakes. 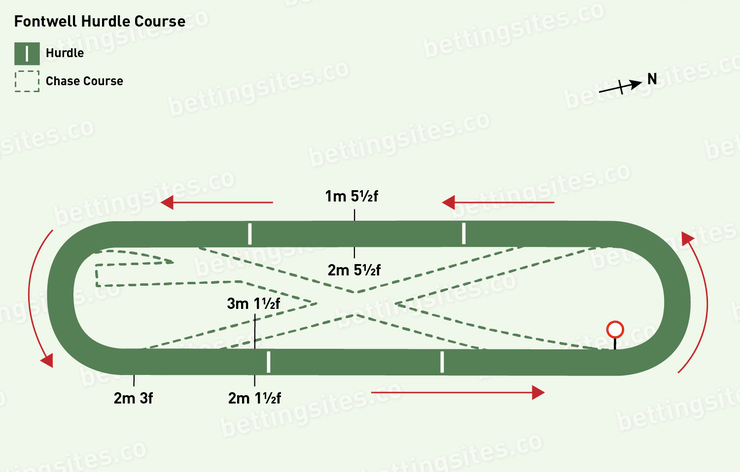 Easily the more standard of the two tracks, the hurdles course is a straightforward oval affair, albeit a relatively tight one at only around a mile per circuit. Flat throughout, the left-handed circuit features four flights of hurdles – two in each of the straight sections – and stages races over 2m1½f, 2m3f and 3m1½. Note that the 1m5½f National Hunt Flat races also take place on the hurdle rather than the chase course.

In common with the majority of tight tracks, Fontwell does not lend itself particularly well to the more galloping type of performer; instead, it is suited to nippier, handier types, more able to maintain their momentum around the bends. Racing prominently can also be an advantage around here, as with a run-in of only 230 yards, there isn’t too much time for those looking to come from behind to launch a late challenge. On soft or heavy going the outer section of the track features the best ground, resulting in the majority of jockeys looking to switch to the wide outside in such conditions. 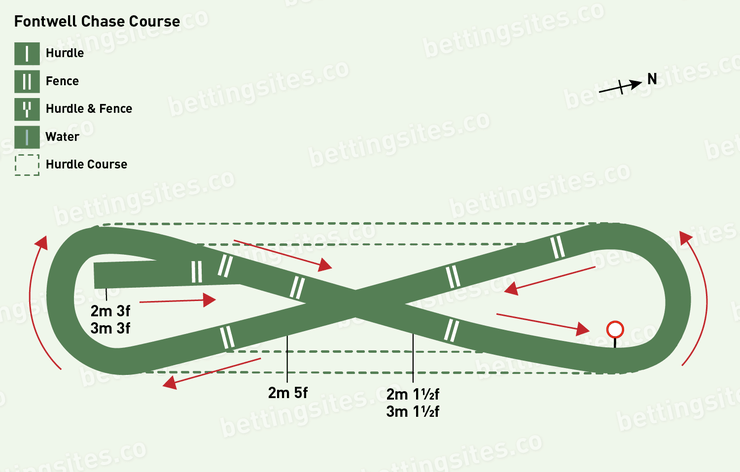 Whilst the hurdles track is fairly standard in configuration, the chase course is anything but, featuring a figure of eight layout which – whilst similar to Windsor on the flat – is not seen anywhere else in the sphere of National Hunt racing.

Using the same two bends as the hurdles circuit, the straight sections of the chase track criss-cross the centre of the course, again creating a lap of one mile in circumference. Given this layout, chasers at Fontwell are faced with both left and right-handed turns, before facing a short 230-yard uphill run-in that veers slightly to the left. Whilst this finishing section is relatively stiff, particularly on soft ground, there are relatively few lead changes following the final flight. Featuring a total of seven fences, including one open ditch, chase events take place over distances of 2m1½f, 2m3f, 2m5f, 3m1½f and 3m3f, with the 2m3f and 3m3f contests beginning on a short spur lying on the inside of the track.

The fences at Fontwell aren’t overly challenging, with the main difficulty of the course undoubtedly being the track’s signature turning sections. Not all runners particularly enjoy being asked to travel round bends in both directions during the course of a single race, and it is no surprise that the course has developed a reputation as being something of a specialist’s track. Nimble and agile performers, able to jump quickly and accurately, are the horses to look for around here, particularly those who boast solid previous form at the track.