Situated in the Heart of Ireland and close to the County Westmeath town of the same name, Kilbeggan racecourse offers a beautiful countryside backdrop, whilst lying only 57 miles from the capital city of Dublin and its many attractions.

Tales of racing in and around the historical town of Kilbeggan date back to as long ago as 1840, but it wasn’t until 1901 that the first meeting took place at the current site. That still makes the track over 100 years old now, with the course occupying a prominent position in the sporting and social landscape of the region for the bulk of that time.

A National Hunt-only venue since 1971, Kilbeggan is one of the most infrequently used of Ireland’s tracks – operating a short summer jumps season between the months of May and September. All told, there are only around eight fixtures per year at this picturesque venue but all are well attended, with the worker-friendly evening meetings and July’s Midlands National fixture proving particularly popular. 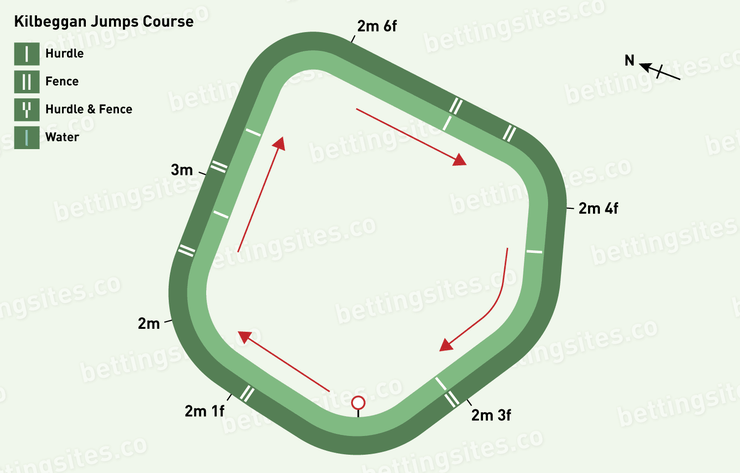 Both the chase and hurdles courses are situated on the same patch of land at Kilbeggan, with the hurdles track on the inner portion of the course and the chase on the outer.

Measuring only 1m1f per circuit, and being close to circular in configuration, runners find themselves on the turn for much of the time at this right-handed track. Whilst none of the bends here could be described as gentle, the turn following the second to last obstacle is notoriously sharp. Throw in the fact that the terrain is undulating almost throughout – including a stiff climb to the line – and it is no surprise that Kilbeggan has developed a reputation as being something of a specialist’s track.

Runners tackling the chase course face six fairly easy fences per circuit; one after the winning post, two in the section leading away from the home straight, two in the back straight and one shortly after the bend into the home straight. If there is to be a jumping error around here it is most likely to come in the back straight due to the proximity of the two fences to one another.

Both courses at Kilbeggan are tight, but being the inner of the two, the hurdles track is particularly so. Those taking part in events over the smaller obstacles face five flights per circuit; two on the run out to the back straight, one in the back straight itself, one on the turn for home and one in the home straight itself. That final obstacle is positioned closer to the winning post than its counterpart on the chase course, leaving little time to gain ground on the run-in.

It should come as no surprise that this is not the course for the long-striding galloping type of performer, nor indeed the dour stayer, with the track not viewed as being particularly testing from a stamina perspective. Speedy front running types, with the ability to handle both the bends and undulations tend to go very well around here – particularly over the sharper hurdles course. A real pace favouring track, hold up performers only really get into it in events where the leaders have gone much too quick out in front.

When looking at the chase contests it is also important to side with a good jumper. Whilst the fences themselves aren’t especially tricky, they do tend to go a good gallop around here, placing an emphasis on being able to jump accurately at speed.

Be it over hurdles or fences, Kilbeggan offers one of Irish racing’s more unique challenges and – as is so often the case with these idiosyncratic venues – any runner to have previously gone well at the track is well worth a second look.

Looking at the results over the past few seasons and there are a couple of names to stand out from the crowd amongst the jockeys and trainers. With a strike rate of 39% and a net win to £1 level stakes of over £17, Paul Townend has been the man to follow in the saddle. Turning to the trainers, and the 36% strike rate of Willie Mullins is much the best. However, Mullins runners tend to be pretty well backed and this still wouldn’t have been enough to return a net win. Henry De Bromhead (21% strike rate, £8 level stakes net win) and Joseph O’Brien (20% strike rate and around £8.50 level stakes net win) are the only handlers to edge supporters into the black over this period.

There is not a whole lot for supporters of the market leader to get excited about over this five-year spell. Although the handicap chase events have rewarded favourite backers with a 29% strike rate and a small net win of £3.50.