Situated in the county town of Warwickshire in the West Midlands, and within hailing distance of the medieval Warwick Castle, lies one of England’s most historic racing venues. First staging equestrian events all the way back in 1694 – as a fund-raising venture following a ruinous fire in the region – it seems that the racing bug soon took hold, with this course opening for business properly in 1707. Unsurprisingly, having now been in operation for over 300 years, this beautiful track is one of the oldest, not only in England, but anywhere in the world.

Becoming the first UK venue to feature a hurdles contest on its card in 1831, Warwick also provided the stage for the first officially recognised steeplechase in 1845, giving it strong claims to the title of being the birthplace of National Hunt racing. Cheltenham may well be jumps HQ but perhaps Warwick deserves a little more attention for its historic role?

The track certainly isn’t stuck in the past though, with a £3million new grandstand built in 2000 and further improvements coming via a substantial 2018 redevelopment. Only a short walk from Warwick town centre and just 21 miles from the major urban hub of Birmingham, Warwick Racecourse continues to draw in the crowds as it moves into its fourth century. 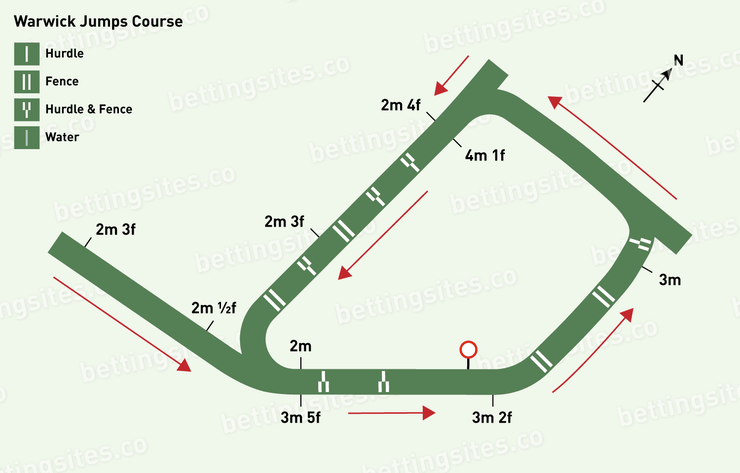 Featuring straight sections of varying lengths, and four relatively tight turns, the configuration of Warwick’s 1m5f left-handed track broadly resembles an asymmetrical kite, if you can picture such a thing. Taking in a circuit beginning at the winning post, the field are first faced with the gentlest of the track’s four turns, with the subsequent straight section then rising steeply uphill to the second, almost rectangular, bend.

Moving out of this bend, the ground then descends far more gradually, before again turning 90 degrees into the longest of the straights. The bend heading out of this section, and into the 2f home straight, whilst still being sharp, is not anything like so severe as the two preceding it. In addition to the round course, the track also features a spur leading into the home straight, containing the starting point for events over 2m½f and 2m3f.

Runners tackling the chase course are faced with ten fences per circuit; three in the straight moving away from the stands, five in quick succession on the stretch leading up to the turn for home, and a final two in the home straight itself. There is a run-in of around 240 yards, just over a furlong, following the last.

Despite being on the stiff side, Warwick’s fences aren’t overly demanding, with the track enjoying one of the UK’s lowest casualty rates. If there is to be mistake, it is most likely to come at one of the five obstacles on the run back towards home. Runners meeting the first of these on the wrong stride regularly struggle to regain their rhythm.

The hurdles course lies to the inside of the chase track and is therefore that bit sharper around the bends. Events over the smaller obstacles feature six flights per circuit, with one in the straight away from the stands, three on the run back towards home and two in the home straight. Once again there is a run-in of just over 1f after the last.

Not an unduly arduous track in terms of its layout, one of the most testing aspects of the course comes courtesy of its underfoot terrain. Based upon a slow draining clay subsoil, soft and heavy going are far from unusual around here. This is something to be very aware of should rain be forecast.

Other than in bottomless conditions, where stamina is the number one requirement for success, Warwick is generally an easy track, appreciated by those who like to race handily, and are able to cope with the sharp turning sections. As such, front runners and prominent racers boast a better record than those who like to be held up. Horses to avoid include those who need time to settle into a rhythm, with such runners regularly struggling to cope with the stop-start pace resulting from the tight turns and up and downhill sections of the track.

Given the emphasis on speed, ex-flat performers often go well in the hurdles events here and can be well worth a second look in the market. However, whilst runners may get away with jumping inexperience over the smaller obstacles, that isn’t the case in the novice chase contests, with those five quick-fire fences set up to punish any lack of fluency.

Warwick hasn’t been the greatest of tracks for fans of jockey trends. Over the past few seasons no rider has managed to reward level stakes support, with even Wayne Hutchinson’s rock solid 25% strike rate not being enough to edge supporters into the black. However, things have been much rosier for followers of trainer Jonjo O’Neill, with the 19% strike rate of the Jackdaws handler translating to a whopping net win of over £78 to £1 level stakes over recent years.

One of the better jumps tracks for supporters of the market leader, simply backing the favourite in every non handicap contest, excluding bumpers, would have resulted in a 54% strike rate and a reasonable level stakes net win of over £6. Adding the non-handicap chases to the mix over this recent spell would have bulged the coffers by over £29 so those races are certainly ones to have the jolly onside in.

Initially a flat-only site, Warwick became a dual-purpose track in the 1800s and remained as such until as recently as 2014. That year saw the curtain come down on flat racing at the course, as the track organisers shifted their focus solely to the jumping game.

Operating broadly in line with the core National Hunt campaign, as you might expect, Warwick stages a total of 17 meetings over the course of its season which runs from September through to May. And there’s plenty of quality on offer too, with the track’s three major Graded class highlights of the Leamington Novices Hurdle, Classic Chase and Kingmaker Novices’ Chase regularly attracting a high calibre of horse. An excellent recent example being One For Arthur, who followed up his 2017 Classic Chase success with a win in the Grand National.