Of course, we all know just how much Irish love their racing, and as such it’s no surprise to learn that there are a number of high-quality racecourses spread across the length and breadth of the land. There is however just the one in County Mayo in the west of the Emerald Isle, and it lies around 2km from the small town of Ballinrobe.

As with much of the nation, County Mayo has a rich racing tradition, with meetings reported as having taken place in the region since as long ago as 1773. Ballinrobe racecourse itself opened later, in 1921, and being located in a natural amphitheatre close to the picturesque Lough Carra, has come to be regarded as one of the top countryside tracks in the country – winning the Irish Racecourse of The Year award in 2012.

A fairly lightly used track, with only around eight to ten fixtures over the course of its season, which runs from late April to September, Ballinrobe stages a mixture of flat and National Hunt cards. Most of these take place in the evening and attract decent crowds considering the relatively low standard of racing that is typical. Highlights include the hugely popular two-day July meeting, and the Mayo National which is held in late May.

Both the flat and National Hunt action take place on the same right-handed track, which is broadly rectangular, bordering on oval in shape, with a circumference of around nine furlongs. The run from the home straight into the back stretch features two turns which are close to 90°, whereas the run from the back stretch back into the home straight consists of just the one very tight turn.

The back straight of the course rises gradually and steadily before then beginning to descend again around 2½f from home. This descent continues around the final bend and along the short run-in of around 1f. The relatively tight nature of the course tends to favour the speedier, more agile type of runner who likes to race prominently.

A recent addition to the course, which can be utilised in both flat and national hunt races is a track extension which lies outside, and parallel to, the back straight. When in use this lends a slightly more galloping aspect to the track, whilst also decreasing the severity of the final bend.

Ballinrobe is one of the better tracks in Ireland for supporters of the market leader, particularly on the flat. Favourites in fact show a level stakes net win across all flat contests here over the past few seasons. Those at the head of the market do particularly well in the non-handicap races for three year olds, and those for runners aged four and older – boasting strike-rates of 50% and 60% respectively.

Declan McDonogh has been the man to follow in the saddle on the flat, with the rider rewarding supporters with an impressive level stakes net win of over £4o over recent seasons. Trainers Jessica Harrington and Adrian McGuiness have also done well over this period; both posting 29% strike-rates and level stakes net wins of around £4.70 and +£16.70 respectively. Pat Twomey meanwhile has saddled only four runners here in the past – three of which have won.

Over jumps, both Patrick Mullins (almost £9) and Jack Kennedy (over £11) have finished with a level stakes net win across the latest seasons. Willie Mullins boasts the best strike rate of the trainers at 33%, but that hasn’t been enough to record a net win. Noel Meade’s win rate of 25% is lower than that of Mullins over the same time frame, but supporters of the Grand National-winning trainer would have been rewarded with a level stakes net win of almost £10. 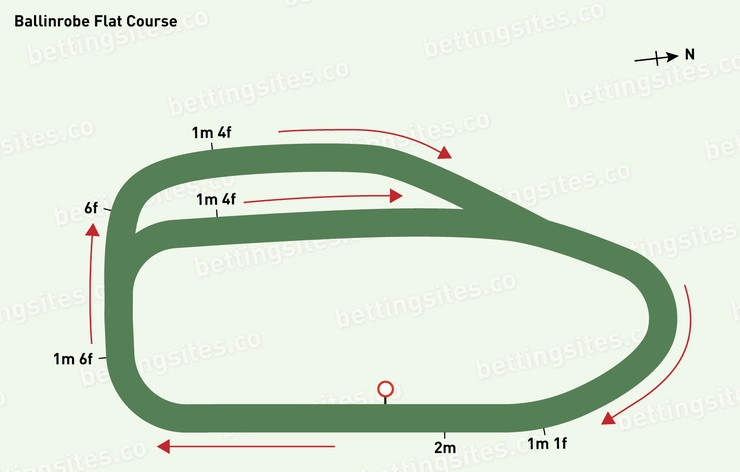 The flat course most commonly stages races over distances of 6f, 1m1f, 1m4f, 1m6f and 2m. Of these distances the trickiest – and least frequently used – is the 6f course. These sprint events begin in the back straight before the contenders attempt to maintain their speed and balance going around the right turn into the short home straight.

Obtaining a prominent position early can be crucial in such contests, as it can be very difficult to come from behind. Runners attempting to come around the field whilst rounding the bend are often forced to forfeit significant ground – with some estimating that such a manoeuvre can cost a runner in the region of five to six lengths. Over a short race that is a considerable distance and so a good start is vital here.

Given the tight nature of the track, you might expect that a low draw would be a big advantage. However, this isn’t really borne out in the results, particularly over races at 1m1f or further, where runners drawn middle to high actually hold a slight edge.

Even at 6f the spread of winners is fairly even, with early pace – rather than a low draw – being the most important characteristic to look out for. Overall, the easy, turning nature of the track and lengthy downhill finish tends to favour frontrunners and prominent racers over all distances – hold-up performers don’t fare well around here. 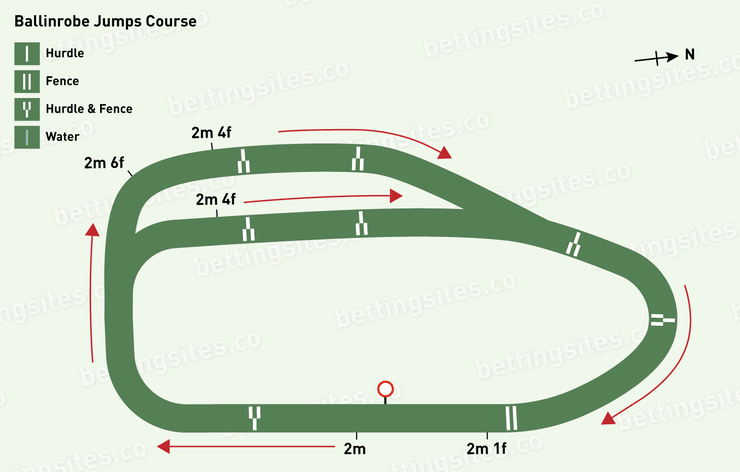 All jumps events at Ballinrobe take place on the same course as the flat track. When in use, the outer back straight does make the course slightly more suitable for the galloping type of runner, but in general it is still an advantage to race prominently. Not a particularly demanding track stamina wise, the long downhill closing section and short run-in mean this is not the type of course for the strong staying type to be seen to best effect.

The hurdle course features five standard obstacles, two in the back straight, two in the turn for home and one in the home straight after the winning post. The chase course contains six fences per circuit, which in terms of stiffness are thought to be amongst the easiest in Ireland. The positioning of the final two obstacles can prove tricky though, as they come up relatively quickly on the tail end of that tight turn into the home straight. If a chaser is to make a mistake, it will most likely come at one of these two fences.