Located just 15 miles or so to the south west of central London, many residents of the capital view Kempton Park as their local racecourse. This venue hosts more races than any other course in the country and is best known for the annual King George VI Chase which traditionally takes place on Boxing Day. This three-mile chase was inaugurated back in 1937 and is one of the most prized and hotly anticipated steeplechase races in the UK.

There are many other jump races of note at Kempton Park while the racecourse also hosts flat racing throughout the year on the Polytrack course which was laid in 2006. The historic races such as the Magnolia Stakes, the Rosebery Handicap, and the Easter Stakes all take place on the all-weather track.

Kempton racecourse has two tracks which are distinctly different from each other. The jumps turf course is triangular, running away from the stands in a north-easterly direction towards central London before returning right-handed after the apex.

The all-weather polytrack track is oval in shape with inner and outer sections to the south-east, the use of which is dependant on the race distance.

Generally the all-weather course runs inside of the jumps though the turf course does bisect the flat track to the north of the stands.

The jumps track at Kempton Park is a right-handed affair, almost triangular in shape and generally very fair with undemanding fences compared to those found at some other courses. This course can prove a far tougher test of stamina when conditions are soft or heavy, which is often the case at the Christmas meeting. One thing to note is that many runners remain in contention on the final turn, however they tend to get strung out a little more when they reach the final fence. On the round circuit, an inside draw can prove to be an advantage and many jockeys get going well before the finish.

When it comes to picking winners at jumps meetings at Kempton, you could do worse than backing whatever Paul Nicholls enters. He has saddled an astounding 11 winners of the King George VI Stakes, up to an including 2019. That also includes his five wins thanks to the great Kauto Star. Nicky Henderson (with nine wins in the Christmas Hurdle) is also one to consider at the Christmas meeting. 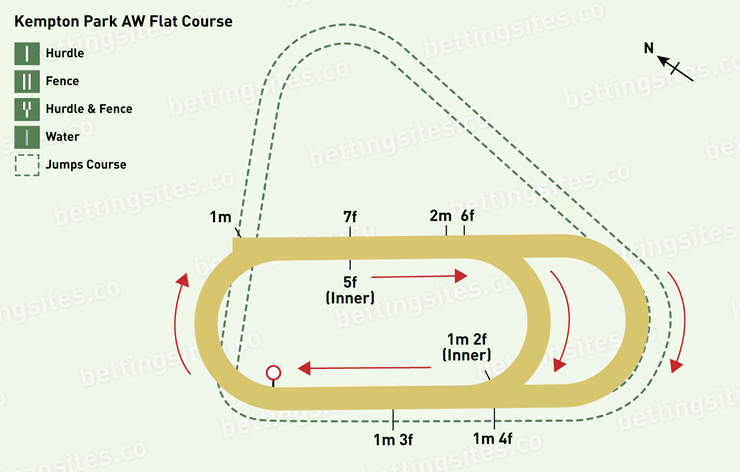 The all-weather course at Kempton Park was installed in 2006 and is oval in shape. There is an outer circuit and an inner circuit; the inner circuit is used for races overs distances of five furlongs, 1m1f and 1m2f. Its turns are tight and tend to favour horses who are nimble and able to readjust on the turn without losing speed. This inner circuit has a two-furlong finishing straight. The outer circuit has straights approaching three furlongs in length with turns which are more gradual in nature, hence many runners and riders find the test offered rather less challenging.