Lying to the north of the picturesque city of Bath in Somerset, and standing proud atop Lansdown Hill, is Britain’s highest flat horse racing course. Fully 780ft above sea level, only the National Hunt venues of Exeter and Hexham are more elevated than Bath, with the track affording excellent views of the surrounding area and the city of Bath itself.

One of Britain’s more historical cities, thanks to the Roman-built baths from which it takes its name, racing in the region doesn’t quite go back to Roman times, but is certainly well established. 1728 is the date put forward for Bath’s first racing events, with contests at the present site first being held a little later in 1811.

From staging only a couple of meetings initially, Bath has now grown to become a well-established part of the British racing calendar – laying on in the region of 20 fixtures per season, featuring a mix of midweek, weekend and evening action. The flat racing season runs from March to October each year, with the highlights being the track’s two Listed class events of the Lansdown Fillies Stakes in April and October’s Beckford Stakes.

From being something of a humdrum track, the race going experience has been given a real upgrade in recent years, thank to the significant redevelopment of 2015/16, which included the opening of the new Langridge stand and its canopied roof garden from which to watch the action. A track well worth a visit!

Aside from being the highest flat racing track, the other most notable aspect about Bath’s racecourse is that it has no watering facilities. That lack of watering, combined with the course’s quick and efficient drainage, and the fact that much of the racing takes place during the summer months, means that, on average, Bath is just about the quickest and firmest track in the country in terms of the ground conditions. Genuinely firm ground is a rarity almost everywhere else in Britain, but not so at Bath where such a going description crops up with regularity. Overall, at least good to firm going is the norm, with soft conditions being very rare indeed. 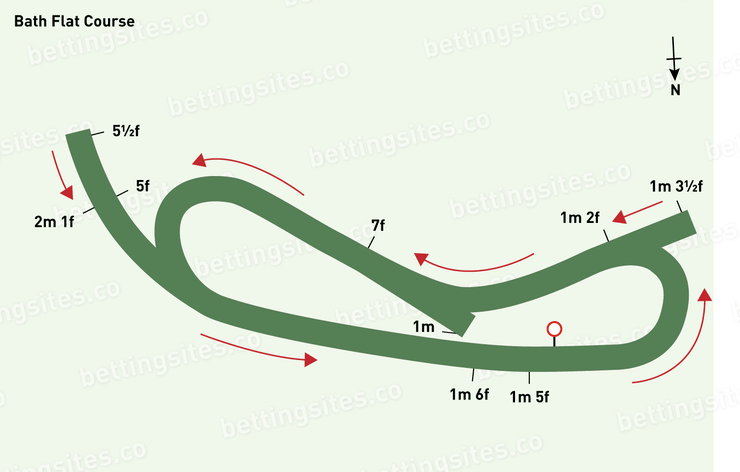 The flat track at Bath is left-handed, around 1m4f in circumference, and roughly in the shape of a “dented oval” or kidney. The smoother, straighter section of the track lies in the 4f home straight, with the curve lying in the middle of the back straight. Whilst the two main – and very tight – turns are left-handed, runners are also required to veer right-handed when navigating the kink in the back straight before meeting falling ground headed into the second main turn.

With those two tight left-handed bends, and the right-handed kink to deal with, runners can find themselves on the turn for a significant part of their journey on the round course. As such an ability to handle testing bends at speed can prove crucial to success, with the fact that the two main bends are also slightly undulating placing a real premium upon the balance of the contenders.

In contrast to the bends and the back straight, the home straight itself plays into the hands of the more stamina-laden galloping type, with its significant 4f length, and the fact that it rises steadily up hill all the way to the line providing such runners with plenty of time in which to build up a head of steam. The home straight can in fact be very punishing, particularly as the track’s hilltop location leaves it vulnerable to strong headwinds at times. Anything kicking for home too early may well run out of steam on the run to the line.

In addition to the round section of the course, the track also features two spurs. The first of these runs into the back straight and contains the starts for races over 1m2f46y and 1m3f144y. The second spur, which provides the starts for the track’s sprint events over 5f11y and 5f161y, turns to the left before joining the home straight proper. This initial turn of the sprint track can be particular tricky as it is also downhill, leading runners to hit top speed before then being faced with that long inclining run for home.

Looking at the types of runner favoured, prominent racers with an ability to handle the turns and undulations do tend to do well, but any advantage bestowed upon such horses tends to decrease as the distance increases. That said, in a small field with little pace in the race, in front and on the rail is the place to be over just about any distance.

Overall, given the track’s various demands upon balance, stamina and adaptability, in combination with the often unusually quick ground, it is no real surprise that Bath is viewed by many as being a particularly tricky track. As with many of the more unique courses, a proven ability to handle the conditions counts for plenty around here, and any horse with a previous course win to their name is often well worth a second look. This is one where we do tend to see specialists and repeat winners.

Considering events contested between 5f and 7f all feature a left-handed turn, logic would suggest that those drawn low would enjoy an advantage. That isn’t really borne out in the stats though. Over 194 races analysed, low drawn runners enjoyed a 7.6% strike rate in such events, as opposed to 9.2% for those drawn in the middle and 8.4% for those drawn high.

Once we venture to 8f and beyond, those drawn high enjoy a definite advantage. Of 237 such races put under the microscope, the strike rates were 7.7% for low, 8.2% for middle and 11.9% for high. This is definitely something to bear in mind when placing those bets at 1m and beyond at Bath.

Given its tricky nature, Bath is a track which places significant demands on jockeyship. Any rider with a proven ability to judge both the turns and the pace of the race effectively is always a bonus, and in recent years Adam Kirby and Tom Marquand have fared better than most. Kirby boasts around a 25% win rate and a +£10 level stakes net win, with Marquand posting a strike rate of around 16% and a level stakes net win even better at a very handsome +£26.

This hasn’t been a track to register a net win by blindly backing a trainer. However, both boasting a rate of over 20% at the course, runners from the yards of Clive Cox and Mark Johnston can be well worth a second look.

Many punters believe that the unique characteristics of Bath lends the track to returning some strange results. The stats would suggest that the spread of winners is much the same as elsewhere though, with favourites at the course returning a respectable 37% strike rate over the past five years. Focussing on the non-handicap events for runners aged four and older, this rises to 53% – enough for a level stakes net win of +£7.66.