Of the 60 racecourses spread throughout the British mainland, none lie further to the west than the Devonshire venue of Newton Abbot. Perched on the banks of the River Teign, close to both Dartmoor National Park and the bustling holiday town of Torquay, this track – only 10 miles down the road from Exeter racecourse – is popular with racing aficionados and tourists alike, and has been for some time now.

Equine events have taken place at the current site since way back in 1866, although it wasn’t until a few years after this that a regular pattern of racing fixtures began to emerge. Enjoying Royal patronage when the Queen Mother attended to open the new Grandstand in 1969, this track is relatively small in stature but big on standards – receiving the Gold Award from the Racehorse Owners Association in 2012. 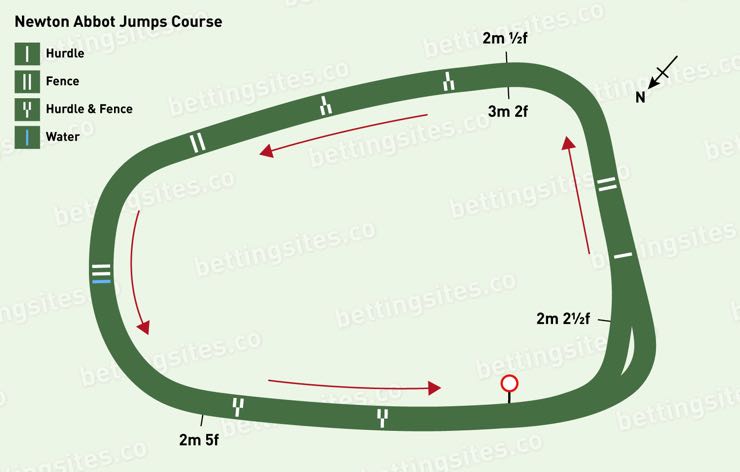 Both chase and hurdles contests take place on the same flat left-handed track. Only around 1m1f in circumference and somewhere between an oval and a square in appearance, this is one of the tighter National Hunt courses in the country.

Runners tackling the chase course face seven fences per circuit, consisting of five plain obstacles, an open ditch and a water jump. Three fences lie in the back stretch, one down each of the sides of the track, with the final two then coming in the home straight.

The fences certainly lean towards the easier end of the spectrum, with the only difficulty stemming from the fact that they can come up quickly on the runners due to the turning nature of the track. Even that factor doesn’t seem to have too much impact though as, statistically speaking, this is one of the easiest chase courses in the country year after year.

Those tackling events over the smaller obstacles face just the five flights per circuit, two in each of the straights, and one on the turn from the home straight into the back straight – with this latter obstacle being jumped on the first circuit only. The only kink with the hurdles course compared to the chase track is that events over 2m3f begin in a short spur beyond the winning post.

In both the chase and hurdles events, runners face a short run-in of only around 300 yards after having safely negotiated the final obstacle. As such it is pretty rare to see the lead change hands on the dash to the line.

In common with the vast majority of tight tracks, Newton Abbot definitely favours the nippier, handy type of performer, as opposed to the long striding galloper. Front runners and prominent racers are at a distinct advantage over hold up horses due to the track’s emphasis on speed and minimal stamina demands.

Perhaps the key factor to look for in a runner around here though is an ability to settle well and travel smoothly. Horses coming off the bridle early regularly find it very tough to get back into a rhythm due to the tight turning configuration of the course.

As ever with these more idiosyncratic venues, those runners with solid previous course and distance form are well worth a second look. As are ex-flat performers making the switch to National Hunt, with such horses regularly proving well-suited to the straightforward jumping challenge, the easy stamina test and the importance placed upon speed that this track provides.

There are no real standout figures amongst the jockeys in recent seasons here with Aidan Coleman’s 30% strike rate and a net win of £4.26 to £1 level stakes leading the way. Nicky Henderson (38% SR, £6.95 LSP) boasts the best strike rate of the trainers over this period, with Fergal O’Brien (28%, £18.75) leading the way in terms of level stakes net win.

A National Hunt-only venue, the racing year at Newton Abbot is closely aligned with the tourist season. The track’s 19 fixtures all take place between the months of April and November, including a number of peak summertime Saturday meetings.

With the track’s only Listed event of the Lord Mildmay Memorial Chase having been discontinued in 2017, the racing programme tends to be pretty average in terms of quality these days. That said, the course does still attract runners from many of the top yards, including that of Paul Nicholls who is based only around 70 miles away in Ditcheat.