Racing has taken place in the Nottingham locale for quite some time now, with reports of events at a venue known as Nottingham Forest dating back to 1773. The exact nature of those early fixtures is however a little hazy and the modern version of the sport in Robin Hood country really begins with the opening of this track at Colwick Park in 1892.

Lying close to the River Trent and only around 3km to the east of the city centre of Nottingham itself, this popular course operated as a dual-purpose venue for much of its lifetime, only converting to a flat-only track in 1996. Whilst it may no longer stage jumps racing, Nottingham will forever maintain a place in the National Hunt history books, having been the course at which Stan Mellor became the first jumps jockey to hit the 1,000 winner mark in 1971. Since focussing on the flat, the track has gone from strength to strength, being awarded the Gold Standard by the Racecourse Owners Association in 2014. 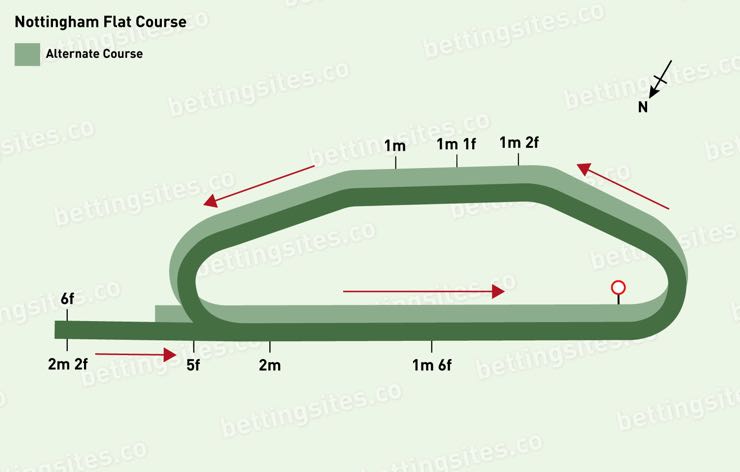 The course at Nottingham features not one, but two tracks. Partially overlapping, the two circuits are almost identical in terms of their configuration, both featuring two long straight sections, and two tight turns, giving each of the 1m4f left-handed courses the appearance of an elongated oval.

Each track also features a spur leading into the home straight enabling sprint contests to take place over a straight course, and it is here where the only real difference between the two courses lies. Whilst the outer track is able to stage straight events at up to six furlongs, the spur of the inner course only extends to five furlongs.

With the two tracks being so similar in appearance, it really makes no difference which of the pair is in use in terms of the type of runner favoured. An ability to alternate between the two does however serve to protect the ground, resulting in a quality racing surface throughout the season; the inner track generally being used during the spring and autumn months, with the action switching to the outer course in summer.

Featuring two straight sections of close to four and a half furlongs and being almost completely flat throughout – the only slight undulations coming two furlongs from home – this is unsurprisingly a track well suited to the more galloping type of performer. That said, some degree of nimbleness is preferred, as the two turning sections of the track, whilst only making up a small section of the overall course, are very sharp. This feature tends to result in events on the round course being run at a steady pace, with riders wary of travelling too quickly into the bends.

In terms of the running style favoured, this tends to be a very fair track. Those that race prominently may enjoy the ability to steady the pace on the home turn before kicking again into the straight, but are still faced with that long four and a half furlong run to the line, giving those held up plenty of time to build up a head of steam and come with a late run.

Races over all distances on the round course do not appear to display much, if any, draw bias. This is most likely due to the long straight sections levelling out any initial edge towards those drawn low.

The figures initially appear to show a similar lack of bias on the straight courses, with no inherent advantage in being drawn on one side of the track or the other. However, this does seem to change when the word soft is contained in the going description, in which case there does seem to be a disadvantage in being drawn low. An analysis of 104 such events held between 2011 and 2021 returns win percentages of 9.1 for high, 8.8 for middle and just 6.4 for low.

Given that long finishing straight, judgement of pace is one of the most crucial factors for the jockeys to bear in mind around here, and as ever there are those riders who appear more attuned to what is required than others. Jim Crowley leads the way both in terms of strike rate (34%) and a net win to £1 level Stakes (£31.49) over the past few seasons, with Andrea Atzeni (25% SR, £10.94 LSP) and Ben Curtis (20%, £23.03) also proving lucrative to follow. Michael Appleby tops the trainers’ table over these five years with his 15% strike rate translating to a level stakes net win of £40.07.

This has also been a solid track for supporters of the market leader of late. Again looking at recent seasons, backing the favourite in every handicap at the track would have resulted in a 36% strike rate and an impressive level stakes net win of £39.04.

Nottingham stages in the region of 20 to 25 fixtures per season, all of which take place between the months of April and November, as the track aligns itself closely to the core flat racing season. In terms of quality, the East Midlands venue boasts a trio of Listed class events in the shape of the Nottinghamshire Oaks, Further Flight Stakes and Kilvington Fillies’ Stakes.

The juvenile contests can also prove to well above average, with many of the top Newmarket yards using the course as a starting off point for their more talented two year olds. A recent example of one who went on to scale greater heights being Derby and Arc champion Golden Horn who won his maiden at the track in 2014.