Geographically speaking Ayr is the furthest west that the UK has to offer and it hosts action throughout the year under both codes (flat and National Hunt), with a couple of obvious major highlights.

The flat enthusiast will point to the Western meeting, held over three days in September. The feature race here is the Ayr Gold Cup, a sprint over six furlongs.

In contrast, the National Hunt connoisseur will most probably suggest the Scottish version of the Grand National. This is normally held in the middle of April and typically takes place seven days after its Aintree counterpart.

Ayr is Scotland’s premier racing venue and is the nation’s only Grade 1 racecourse. It has two tracks, one for flat meetings and one for National Hunt, including both chases and hurdles. Both are run left handed and are generally towards the fairer end of the spectrum in terms of what style of runner can win. Of course, Scotland is hardly famous for its fine weather and the going can certainly get very testing here with some drainage issues over the years. 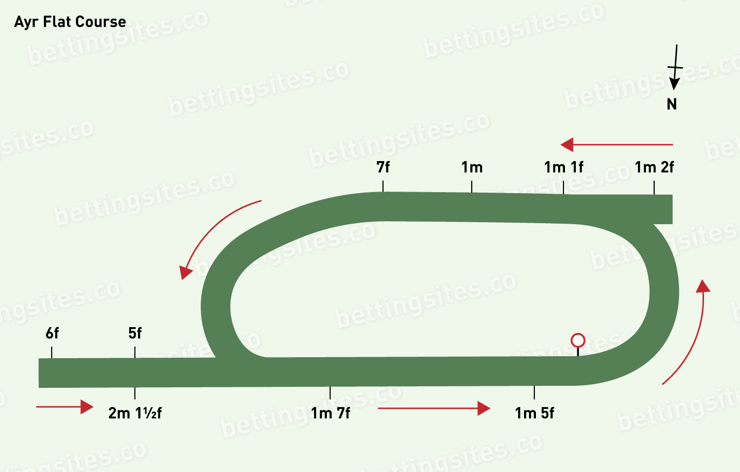 The round part of the course is approximately a mile and a half long with a run-in of just under four furlongs and all races over 6 furlongs are contested on this course. The straight course, used for sprints, is wider than average and with fields of up to 28 runners it is not uncommon for them to split into groups. In races of this nature the draw advantage is statistically high but changes according to the ground conditions and stalls placement.

On heavy ground, which is far from uncommon, the sprint course in particular is one of the most testing in the country and because of this hold-up horses seem to have an advantage on rain-softened ground. A rails position is generally an advantage in smaller fields, however in bigger sized fields the pace angle is the main focus of where you need to be positioned.

On the round course the turn on the approach to the straight is slightly downhill and for those racing prominently it is an opportunity to try and gain an advantage. In addition, it is important not to take that last turn too wide. Once in line for the gentle uphill run for home, the prominently ridden horses tend to have the edge.

The chase course is again 12f in circumference with nine fences to deal with, whilst the hurdlers face six flights and the run-in for both is a shade under a furlong. Ground conditions are key at Ayr over hurdles and fences. On fast ground horses can find themselves getting into a nice rhythm and can be difficult to peg back if they establish a decent advantage.

On the reverse side, in the not-uncommon heavy ground it is an advantage to play the waiting game as horses who go off quickly tend to stop and fail to get home. On the chase course the third last fence is the final open ditch and a fence where often races can be won and lost.

The fences are all generally fair and the turns are gentle, so Ayr is definitely a course where all horses have a chance of winning. That said, slight preference is for a horse that can jump cleanly and get into a comfortable rhythm, especially when the going is drier.