The landlocked county of Tipperary in the central, southern part of Ireland, is home to a total of three racecourses, with this track – sited around 1.5km to the west of the town of Thurles itself – being one of only four in the whole of Ireland dedicated exclusively to National Hunt racing.

Opened way back in 1732, the track also boasts the distinction of being the only privately owned racecourse on the Emerald Isle, having been in the hands of the Molony family since the early 1900s. Initially designed solely as a location for horses to race, rather than as a spectator friendly venue, Thurles has developed to meet the demands of the punters over the years, and now boasts modern facilities to compliment the area’s natural rustic charm and the passion of the local fans. 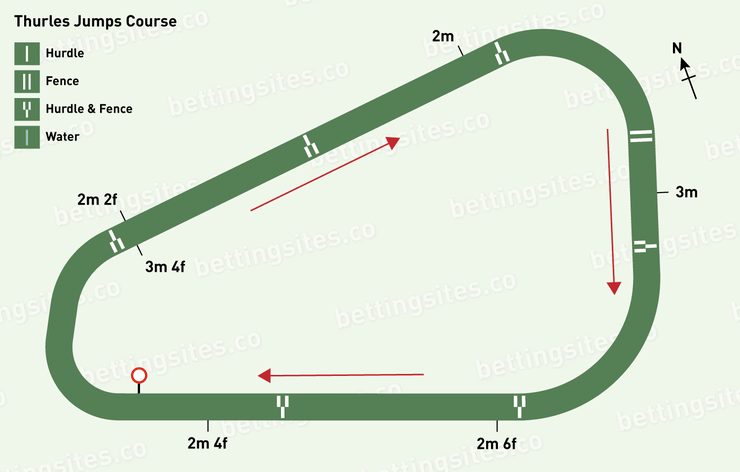 The first thing to note about the course at Thurles is just how resilient the ground is, with the fast-draining turf notoriously hardy in the face of the Irish winter. So reliable is the track that many jokingly refer to Thurles as being Ireland’s first all-weather venue, and even in the wettest of winters it is unusual for the ground to become too testing around here.

The track itself is an asymmetrical right-handed oval of close to 1m2f in circumference, with the turn out of the home straight being significantly shorter and sharper than that which leads out of the back stretch. Featuring undulations throughout, the second half of the back straight climbs significantly, before a long sweeping downhill turn takes the runners into a 2f home straight which then rises steadily all the way to the line.

Those tackling the chase course are faced with a total of seven fences per circuit; three in the back stretch, two on the home bend and a final two in the straight itself. Being an open ditch and coming on a turning section of the track, it is the first on the home bend which is the trickiest of these obstacles.

The hurdles track lies to the inside of the chase course, and is therefore that bit sharper around the turns. Contenders are faced with three flights in the back straight, one on the turn for home and a final two in the straight. On both the hurdles and chase layouts runners are faced with an uphill run of around 1f following the final obstacle.

With that uphill climb to the line to come, many jockeys opt to get a breather into their mount in the back stretch, which can result in the pace slowing during that portion of the race. Also expect to see many riders switching to the outside of the course in the latter half of a race card as, despite its overall reliability, the turf can become a little churned up and ride slower towards the inside rail.

With its relatively short straight sections, tight turns, and undulations throughout, Thurles is in essence a sharp track, and as such tends to favour nippy sorts who either like to lead, or at least race up with the pace. With that downhill turn for home helping the leaders to build momentum, it can be tough for hold up performers to gain sufficient ground up the short run in. The fact that the ground very rarely becomes too testing also contributes towards speed being favoured over stamina, with adaptable frontrunners seemingly holding the edge over all distances.

Trends fans may be left scratching their heads at this track, with no trainer or jockey having returned a level stakes net win over recent seasons. Paul Townend’s 26% strike rate leads the way amongst the riders over this period, with the 32% figure of Willie Mullins topping the trainer’s pile. Clearly these are very solid win rates, but backing either man blind would still have sent supporters firmly into the red. And things don’t get any better for favourite backers either, with the jolly recording a level stakes loss in every race category over this period. Despite being a generally fair track, it seems that Thurles certainly throws up some unexpected results.

Operating in line with the core National Hunt season, Thurles stages a total of 11 fixtures between the months of October and March. The majority of these meetings are Thursday afternoon affairs, with the notable exception being the hugely popular Sunday fixture in Christmas week. A Graded quality track, the year’s major contest comes in the shape of January’s Kinloch Brae Stakes (currently run as the Horse & Jockey Hotel Chase), which was won by both Don Cossack and Sizing John prior to their Cheltenham Gold Cup triumphs.