Located in County Kerry in Ireland, Listowel has enjoyed competitive horse racing action since way back in the 19th Century – a time during which the equine entertainment shared top billing with organised brawls known as faction fights. For better or worse, the scraps have now been dispensed with, and it is the racing that has the stage to itself in modern times. From fairly low-key beginnings, the profile of racing in Listowel has grown greatly over the years, really exploding in popularity since the opening of the first grandstand in 1924.

Lying close to the River Feale, but also within hailing distance of Listowel town centre, the track enjoys the dual benefits of a picturesque location and close links to everything the town has to offer. No surprise then that the course regularly proves to be amongst the most popular in Ireland with racegoers.

One of the more infrequently used racecourses in Ireland, Listowel stages a total of only 10 race days per year – with those 10 days being crammed into just two meetings. The three-day Spring Meeting in late May/early June comes first, but it is the seven-day Harvest Festival for which the track is best known. Held in September each year, this meeting features both flat and National Hunt action and lies behind only the Galway Festival in terms of spectator attendance. Wednesday’s Kerry National acts as the headline event of the fixture.

Both flat and National Hunt events use the same left-handed track at Listowel. Somewhat unusual in its configuration, the track features a standard oval layout of around a mile in circumference, but also an alternative back section which, rather than running straight, it instead curves throughout, creating a triangular track of close to 1m2f in distance.

Listowel can be a tricky track for the riders, not least due to the differing demands of the two back sections of the track. Gary Carroll is the man to stand out on the flat over recent years, having registered a 20% strike rate and a net win to £1 level stakes of an impressive £71.00. Joseph O’Brien (21% SR, £2.25LSP) and Joseph Murphy (17%, £34.00) have been the flat trainers to follow over this period. Interestingly no National Hunt trainer or jockey has returned a net win to supporters over the years in question. 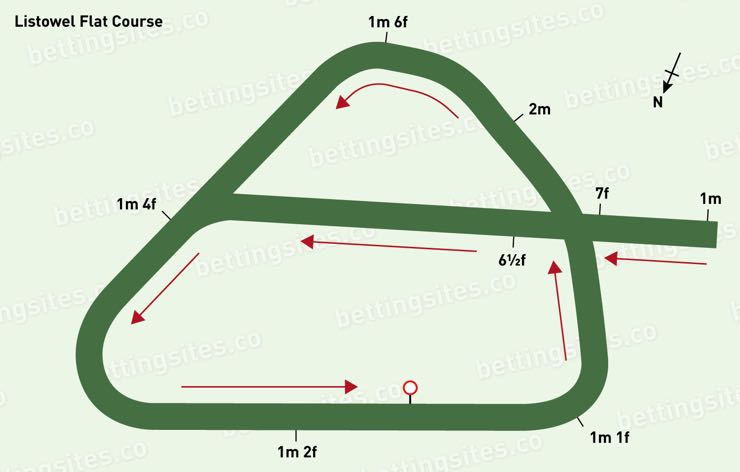 In addition to the oval and triangular tracks, the flat course also features a short spur that runs directly into the back straight. This spur contains the starting points for events over seven furlongs and a mile, with these races and those over six and a half furlongs omitting the curved back section of the track entirely and as such featuring tighter turns than races over the longer distances.

That said, the outer triangular track is still considered to be pretty tight and sharp, with both tracks definitely favouring nimble, speedy sorts who like to race up with the pace. When picking out those bets at this track, prominent racers ought to be your first port of call, as Listowel is renowned as being one of the worst courses for hold-up performers in the whole of Ireland – attempting to come from behind on this tight course can prove to be very tough indeed, particularly as there is only a relatively short run-in of two furlongs following the final bend.

On quicker ground, Listowel is not an unduly demanding track from a stamina perspective, but this changes dramatically when the rain arrives. Not the quickest of tracks to drain, the ground here is amongst the most testing in Irish racing when the going is described as soft or heavy and many horses simply don’t handle it.

In terms of the draw, logic would dictate that a low stall would be an advantage at this tight track; however, this is not really backed up by results that show a fairly even spread of winners from low to high. Overall, a runner’s favoured racing style is of far greater significance than the draw around here. 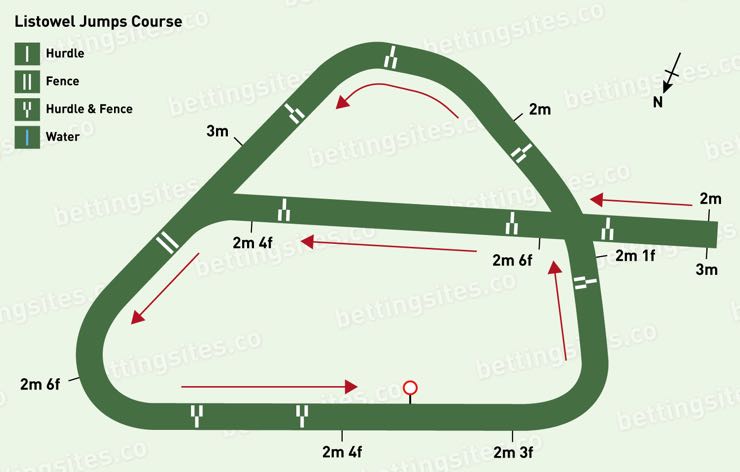 Both chase and hurdle events have the option of using either of the back straight sections. Which section is in use on any given race day will be noted on the race card, with the undeviating back straight being denoted as the inner (I) track, and the triangular back section the outer (O).

The chase track lies inside the hurdles course and features seven pretty stiff fences per circuit, including one open ditch, with the final two obstacles lying in the home straight, followed by a short run-in of 200 yards.

Lying to the outer of the chase course, the hurdles track isn’t quite so tight, but any difference is only negligible and has no impact on the type of runner favoured. Runners tackling the smaller obstacles are faced with six flights per circuit, with the final two again coming in the home straight.

Handier runners are again favoured in National Hunt events, although not quite to the extent as in the flat contests. Whilst stamina is important in flat races on soft or worse ground here, it is absolutely essential in the National Hunt events. Longer races on soft or heavy ground around here can provide a war of attrition almost unlike any other.