Lying 47 miles to the north of Edinburgh, and three miles outside the town from which it takes its name, Perth racecourse is the northernmost of Britain’s 60 tracks. Sited on the banks of the River Tay within the Scone Palace Parklands, this picturesque venue is hugely popular with Scottish racegoers and those travelling from further afield.

In addition to being the most northerly, the track is also steeped in racing history, with events taking place in this area of Central Scotland since as long ago as 1613. Initially held at South Inch and then North Inch Park, a drinking ban at the latter venue resulted in a shift to the present location in 1908. And from that moment the reputation of the track has only continued to grow, with Perth winning the Best Racecourse in the North Award on no fewer than seven occasions between the years of 2003 and 2012. 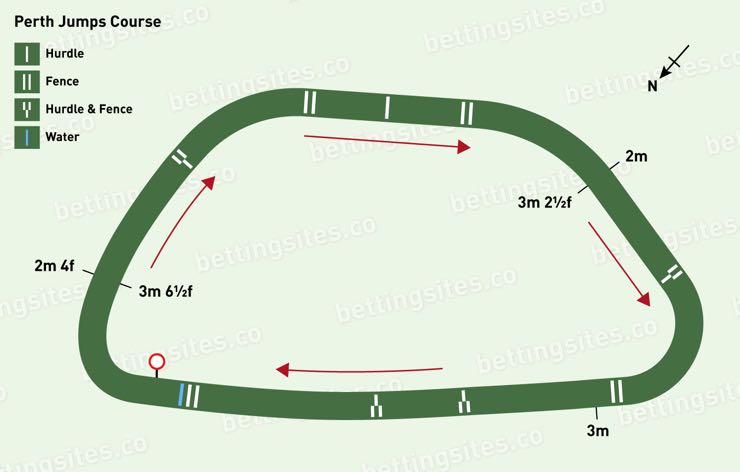 Chase and hurdles events take place on the same patch of land at Perth. Right-handed, almost flat throughout and close to 10f in circumference, the track resembles a skewed oval, with the home straight being notably longer than the back stretch. The bends into and out of this back section are fairly gentle affairs, however those entering and leaving the home straight are far sharper – regularly testing the balance of the runners.

The hurdles course lies on the inside of the chase track as the field heads away from the stands, but then switches to the outside as they turn back into the home straight. Runners tackling the smaller obstacles are faced with five flights per circuit, one in the back straight, one on each side of the track and a final two in the home straight.

Being the outer of the two tracks for close to three-quarters of its duration, the chase course is not quite so sharp around the bends as its hurdles counterpart. Each circuit features a total of eight obstacles; five plain fences, two open ditches and a water jump which lies close to the winning post and is omitted on the final circuit. Of the eight obstacles, it is the first in the home straight which riders regularly report as being the trickiest, likely due to the fact that it comes up so soon following a sharp bend.

Featuring only relatively short straight sections and fairly sharp turns, the well-built long striding gallopers can find themselves at a disadvantage around here. Overall, nippy, well-balanced, sorts – particularly those who like to race prominently – are thought to be favoured over both hurdles and fences at Perth.

Another thing to look out for when making those selections is an ability to truly stay the distance. Perth may have the appearance of a track which ought to provide an easy test, but that is regularly offset by the fact that they tend to get racing a long way from home around here, bringing the stamina of the contenders firmly into play. This is something to bear in mind over hurdles, but all the more so in the chase events as, with the water jump not being tackled on the final circuit, the runners are faced with a punishingly long run-in after the last. What’s more, even with summer racing, the going is often testing, making those yards seem even harder.

It’s a fair old hike from Wales all the way up to Scotland, but for Peter Bowen it regularly proves to be a trip well worth taking. Sitting on a 43% strike rate and profit of £19.36 to £1 level stakes over the recent seasons it is the Pembrokeshire based handler who tops the trainer’s table here, with Donald McCain (24%, +£10.72) also rewarding supporters over this period.

Given the success of his father, for whom he regularly rides, it is no surprise to see the name of Sean Bowen (33%, +£15.76) towards the head of the jockeys’ standings, with Craig Nichol (14%, +£19.87) another rider who goes very well around here.

Overall, Perth appears to be a fairly average track for favourite backers. The one exception to this being the non-handicap hurdles events which have returned an excellent 66% strike rate in recent years – enough for a level stakes profit of £11.63.

A National Hunt only venue, Perth operates exclusively as a summer jumping track these days, with its season beginning in April and ending in September. As a result, the majority of the track’s events fall outside of the jumps season proper, but at least the organisers are spared the difficulty of attempting to stage racing during the depths of the Scottish winter.

Of the 14 race days spread over the course of the season, it is the campaign-opening three-day April Festival which acts as the highlight, featuring both the Future Champions Novices Hurdle and the Highland National. Other standout contests include the track’s most valuable race of the Perth Gold Cup in June, and the late season feature of August’s Summer Champion Hurdle.