Going under the full title of Catterick Bridge Racecourse, this dual-purpose rural venue is located within a mile of Catterick itself, and only five miles to the south of the historic market town of Richmond in North Yorkshire. The racing in the region is also pretty historic, with tales of the sport taking place in the locale dating as far back as the seventeenth century. The first recorded meeting took place later in 1783, with the course itself then being created in 1813.

These days the track offers a nice mix of the old and the new, with the framework of the 100+ year old grandstand still in situ but having now been thoroughly modernised throughout to provide all of the facilities expected by the present day racegoer.

No doubt partly due to the fact that the track is located close to the buzzing training centre of Middleham, Catterick is a much-used venue, with around 28 meetings per year (18 flat and 10 National Hunt), including at least one in every calendar month. It is with good reason that this no-frills yet charming course is well known as being Yorkshire’s busiest track!

Despite the regular action, there are no really high-profile contests held at this small and welcoming venue. Probably the biggest event of the season is the marathon 3m6f North Yorkshire Grand National which takes place in January of each year.

There have been whispers for a while now that Catterick may one day be converted into an all-weather venue, much in the manner as has been achieved successfully at Newcastle further to the north. For now though they remain only whispers, and the track continues to operate on turf, providing both flat and National Hunt action.

The course itself is one of the more unusual in the country, and features a sharp, cramped oval circuit, with tight left-handed turns and significant undulations. Given those characteristics it will be no surprise to learn that this is not the track for the long striding, galloping type of performer to be seen to best effect – either on the flat or over jumps. Very much a speed favouring track, nippy front runners tend to fare well here under both codes.

One of the easier tracks on the British racing scene in terms of the stamina demands it places upon the runners, it isn’t unusual to see horses stay certain distances at Catterick that they can’t quite manage to see out at other venues. The ground at the track only rarely significantly increases these stamina demands, with soft/heavy ground being something of a rarity due to the track’s quick-draining gravel subsoil and the relatively low rainfall experienced.

The intricacies of Catterick racecourse aren’t only tricky for the runners, they also place significant demands upon the skills of the men in the saddle. Knowing the sections of the track were a lead can be poached and judging exactly when to kick off the final bend are two of the key factors to success, and can make all the difference in a tight event.

As such, it can be well worth paying close attention to those runners carrying a jockey with a proven record at the venue. When looking at the stats across recent years, the two men who stand out are Connor O’Farrell over jumps, with a 25% strike rate and £1 level stakes net win of almost £47 which is very tidy, and James Sullivan over the flat (17% and over £17 level stakes net win).

Another interesting trend is that it has been relatively easy to make a net win in National Hunt racing at Catterick over the past five seasons. Simply backing the marker leader in all such races would have resulted in a 41% strike rate and a £1 level stakes net win of nearly £11. To narrow things down a little, it should be noted that much of this comes from the bumper events at the track which were landed by the jolly an impressive 63% of the time. The market leaders haven’t fared quite so well on the flat though, with the best record coming in the non-handicap events for the two year olds (49% strike rate, £2.00 level stakes net win). 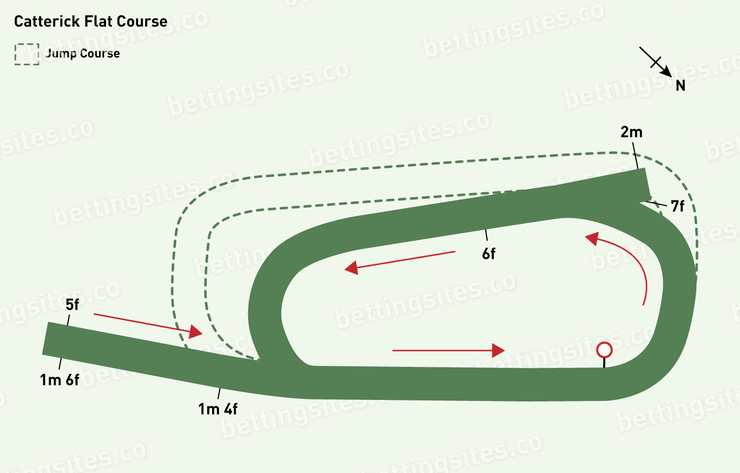 At 1m198y per circuit, the tight oval of the flat course is the slightly shorter of the two tracks at Catterick. In addition to the main oval section of the course – which incorporates the 5f212y and 1m2f39y starts – the track also features two spurs; the first, and shortest, of which leads into the back straight and contains the starts for events over 7f and 1m7f177y.

At around two furlongs in length, the second spur is far more substantial, and kinks ever so slightly left-handed into the three furlong run-in of the home straight. Races over 5f, 1m3f214y and 1m5f175y begin in this second spur.

As mentioned, the underfoot terrain at Catterick is notably undulating. Beginning at the winning post, the ground rises slightly as it bends into the back straight and continues to rise for around a furlong or so. After this point it is downhill for the runners all the way to the line, taking in the remainder of the back straight and the turn for home, before then meeting that 3f downhill and undulating run for home. Those runners tackling the shortest sprint trips will initially encounter the steepest downhill section of the track which extends for around 2f before heading into the home straight of the oval course.

When looking at the type of performer favoured on the flat track, it is the smaller, more well-balanced runners who tend to fare best, particularly those who like to race up with the pace. Losing ground early and having to come from behind can prove very difficult around here, especially for the larger horses who can often struggle to get into a rhythm due to the regular interruptions of the tight turns and undulations. Something of a specialist’s track, anything with previous winning form at the course is well worth a second look, whilst those runners having their first experience of the track can usually be expected to take a little time to adjust to its demands.

In general at Catterick, low against the inside rail is the place to be over all distances when the ground is riding good to firm or faster. However, due to the manner in which the track drains, those drawn high seem to enjoy a definite advantage on soft or worse going.

The above bias is particularly pronounced on the sprint track, where the differences in win percentages under varying going conditions is pretty striking. In an analysis of all 5f races to be run at the track since 2011, the strike rates on good or quicker going were 10.6% for low, 8.2% for middle and 7.9% for high. On soft or worse going, these win percentages read 5% for low, 6.1% for middle and 13.6% for high. Definitely something to bear in mind when assessing those bets and means that it always pays to heed the going here at Catterick. 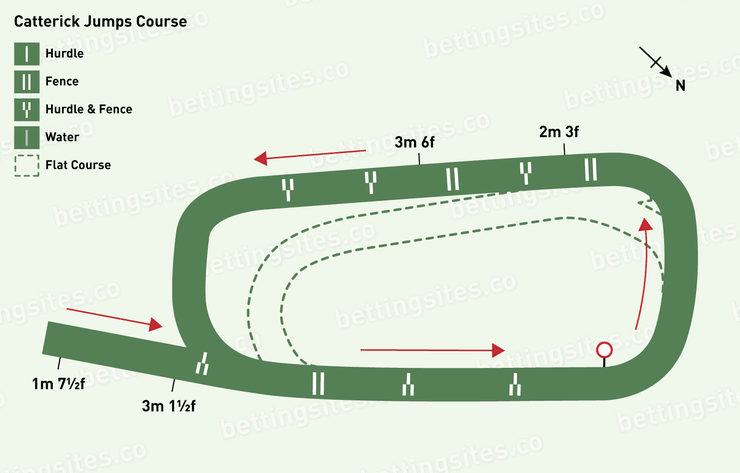 Due to the back straight and bend into the home straight lying slightly outside the corresponding sections on the flat layout, the National Hunt course at Catterick boasts a slightly longer circuit of 1m3f. Despite this, the jumps track is similarly undemanding from a stamina perspective – if a runner can stay a specific distance elsewhere, they will most likely be able to do so at Catterick.

Runners tackling the chase course will be greeted with nine fences per circuit, including two open ditches. Five of these fences are lined up in the back straight and four in the home straight. Whilst the obstacles themselves are relatively easy, they are placed fairly close together which increases the difficulty, particularly down the back straight. Due to the easy nature of the track, chase contests do tend to be run at a strong pace around here, which can lead to a greater number of errors than might be expected. Chase contests tale place over distances of 1m7½f, 2m3f, 3m1½f and 3m6f.

The hurdles course features six obstacles per circuit, three in the back straight and three in the home straight. Races over the smaller obstacles take place over distances of 1m7½f, 2m3½f and 3m1½f .

The key characteristics for success on either the hurdle or the chase course are an ability to travel smoothly and to jump accurately at speed. Front runners are favoured as it can be very difficulty to come from behind, with the short run in of 240y following the final fence also benefitting the prominent racers. Make note of any horse who does manage to win from off the pace at Catterick, as they will likely have a strong chance of repeating the trick elsewhere.