Lying in the heart of Nottinghamshire, and only around two miles outside of the town of the same name, Southwell racecourse is one of the busiest tracks in the UK. It offers a steady stream of both National Hunt and flat All-Weather action throughout the season.

In common with much of the British Isles, the area has staged racing for some time now, with tales of pony and thoroughbred events taking place in the vicinity of Southwell Minster dating back to the 1840s. The Minster track was then forced to close in 1897, but a new venue wasn’t long in taking over, with the current site at Rolleston near Newark-on-Trent opening just seven months later, and it has only gone from strength to strength since, with the current grandstand having been opened in 1965.

One of Britain’s lower-key venues, Southwell’s main claim to fame lay in being the only all-weather track to utilise a Fibresand surface though they switched to Tapeta in 2021. And it was in 1989 that Britain’s first-ever all-weather jumps contest took place at Southwell – not that it lasted long, with the practice being swiftly discontinued on safety grounds. In more recent times the track hit the headlines when forced to close due to a serious flood in 2012, but quickly bounced back from that and continues to prove a popular destination for Nottinghamshire racegoers and those from further afield.

A National Hunt-only venue in years gone by, these days Southwell lays on turf jumps meetings throughout the summer months, in addition to all-weather flat action right throughout the year. All told this equates to a total of around 50 fixtures per season, including a number of evening meetings under the floodlights which made their debut at the track in 2019.

There are no events at Southwell rated at Listed level or above – either on the flat or over jumps – but the track does take part in the popular All Weather Championship’s initiative, whilst the summertime “Ladies Day” regularly draws a capacity crowd.

Southwell has proven to be a rewarding track for fans of trainer and jockey trends, with a number of riders and handlers returning impressive figures.

Again, looking at the past few seasons, Southwell has proven to be a pretty average track for supporters of the market leader, with the only lucrative race categories being the two year old events on the flat (43% strike rate, around £4.40 level stakes) and handicap hurdles (35% strike rate, over £7 level stakes net win). 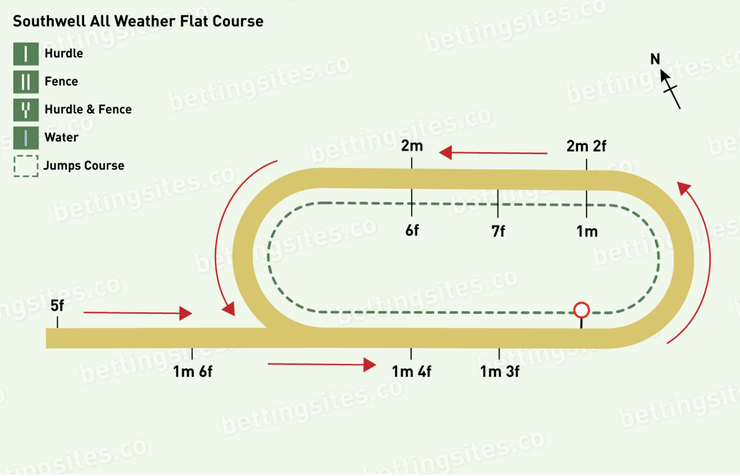 Of Britain’s six all-weather tracks, Southwell had been the only course to utilise Fibresand. A deep and slow combination of sand and wispy fibres, this “dirt-like” surface did add variety to the British all-weather scene but was unpopular with many due to its gruelling nature and high levels of kickback. The decision was therefore taken to switch to Tapeta – a much quicker surface, more akin to good to firm turf, and one which is already currently in use at both Wolverhampton and Newcastle. Closing in after the Ladies Day fixture on 15th August 2021 to carry out this switch, the all-weather action at Southwell will take place on Tapeta from the Autumn of 2021.

Whilst the surface has been altered, the layout of the track remains the same, being an almost totally flat, left-handed oval of around 1m2f in circumference – very similar in design to many US tracks. In addition to the main oval course, the three-furlong home straight also features a two-furlong chute enabling sprint contests of five furlongs to take place on a straight track.

Featuring fairly tight turning sections, logic would dictate that those drawn to the inside would hold an advantage. However, the opposite has proven to be true over the years, with those drawn high boasting much the better record. The best advice here would however be to disregard the past draw stats, as the new surface may throw up an entirely different bias. Similar comments apply to the type of runner favoured, for whilst stamina was at a premium on the Fibresand, it is unlikely to be so crucial on Tapeta. 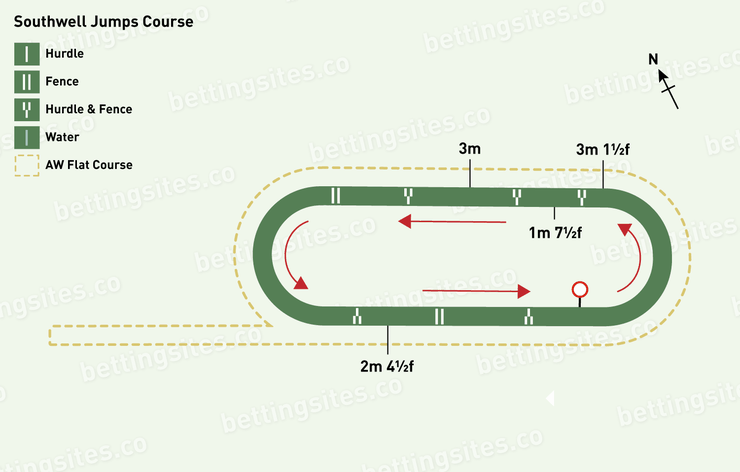 The National Hunt turf course lies to the inside of the all-weather track and is, therefore, that bit sharper than its flat counterpart. Also riding left-handed, the course features tight bends and, with the majority of the events taking place on good summer racing ground, tends to favour speedy sorts who like to race prominently. However, be aware that the polar opposite is true when the rain arrives, as this track can quickly become very testing indeed – placing the emphasis firmly upon stamina.

Southwell is one of the more unique National Hunt tracks in that it utilises portable obstacles which are added and removed as and when needed, meaning that both chase and hurdles contests take place on the same section of the track.

Those tacking fences are faced with seven obstacles per circuit – four in the back straight, and three in the home straight, with a run-in of around a furlong following the final fence. The fences themselves are pretty stiff for a minor track which, in combination with the lower class of performer, does result in a higher than average number of fallers. Lying pretty close together, and just prior to a bend, it is the final two in the back straight which seem to pose the most difficulty.

The jumping challenge over hurdles is also more difficult than standard, with the track using brush style hurdles – more akin to small fences than the type of flimsy obstacle so easily knocked over elsewhere. Hurdlers face five flights of these brush obstacles per circuit – three in the back straight and a final two in the home straight, with a one-furlong run-in following the last.