Situated roughly midway between the cities of Manchester and Liverpool, Haydock Park is one of the busiest racecourses in the UK with jump and flat racing taking place on 32 days of the year.

The venue of some of the best attended meetings in the racing calendar, this is a racecourse that is steeped in history and it is home of many prestigious races including the Haydock Sprint Cup, the Betfair Chase, the Lancashire Oaks, the Temple Stakes and the Grand National Trial.

The Haydock flat and jumps tracks are left-handed and oval in shape with a length of approximately one mile and five furlongs. There are lengthy straights with gradual bends and this is generally reckoned to be a fair course. The track has little in the way of undulations although there is a slight climb on the home straight. 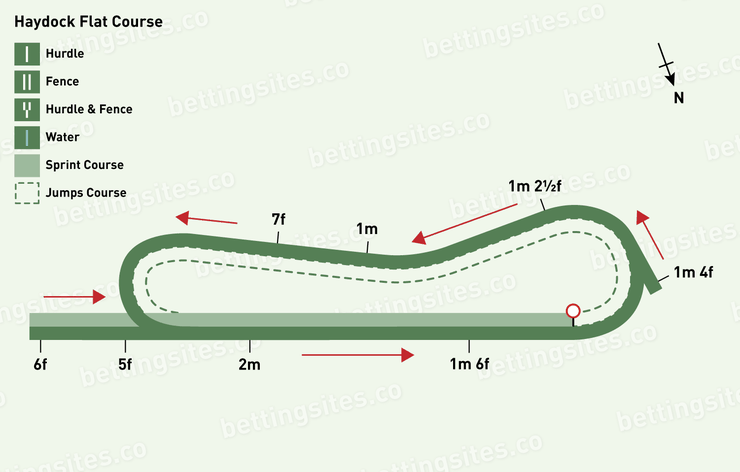 There is a stamina-sapping run-in with a length of four and a half furlongs and a consistent uphill gradient, this often resulting in a change of leadership in the final furlong. When the going is on the softer side on the run-in, runners often split into two distinct groups in search of the better ground. In races of over seven furlongs, horses usually gravitate to the fair rail on the straight, however when the ground is testing they usually move to the stand side. Regardless of the ground, a decent position on the turn in is of the utmost importance. A chute joins the main track to create the six-furlong straight which is used for the sprints, horses generally using the centre of the track on these occasions.

For those seeking winners in Haydock’s only Group 1 race at the time of writing, the Sprint Cup, there are no obvious trainer or jockey trends in recent years to turn towards. James Fanshawe and Henry Candy each saddled two winners between 2010 and 2019, but there have been 10 different winning jockeys in that time.

Two chase courses are in operation at Haydock, the Inner Course and the Lancashire Course. It isn’t always obvious beforehand which one will be used, however the Lancashire is always used for the Betfair Chase.

Generally, the emphasis here is on stamina with conditions often being gruelling during the winter months. That said, the ground usually undergoes a massive change as the season progresses and the emphasis moves to speed for the Swinton meeting which takes place in May, the track suddenly becoming much sharper and suiting a variety of running styles. This is generally a fair course and times can be extremely fast when the ground is firm.

Though the Betfair Chase has only been running since 2005, the trainer Paul Nicholls has already saddled six winners ahead of the 2020 renewal: four wins coming from Kauto Star and two from Silviniaco Conti.