Lying close to Middlesbrough, Darlington and Durham, Sedgefield racecourse enjoys solid links to a number of major urban hubs, but has no trouble in maintaining its appealing air of rural tranquillity. Offering a relaxed day of jumps racing action, the track is a popular venue with racegoers from the North East and those from further afield.

It has been that way for some time now, with tales of racing in the area dating all the way back to 1732. Chosen as the base for the local hunt in 1804, the first officially recognised race meetings came later in 1846 but only on a relatively small scale, with no more than two meetings taking place per year prior to the First World War.

Whilst the number of fixtures has increased steadily over the years, it hasn’t always been plain sailing at Sedgefield, with the track being threatened with closure on a number of occasions. Thankfully though disaster has always been averted, mainly due to the interventions of owner Frank Scotto in the 1970’s and Northern Racing and the Arena Racing Company in more recent times. Seemingly much more settled these days, this low key, leisurely track remains well worth a visit. 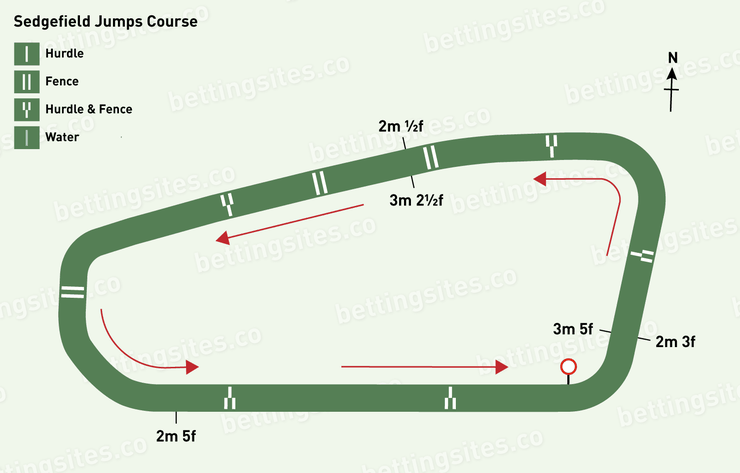 Both the hurdles and chase contests take place on the same course at Sedgefield, with the hurdle’s events utilising the inner portion of the track and the chase events the outer. Close to rectangular in configuration and featuring sharp turns and undulations throughout, the circuit of 1m2f is relatively undemanding for much of its duration.

Things change markedly in the three furlong home straight, however; following an initial descent, it then begins to rise steeply and continues to do so all the way to the line. A tough finish at the best of times, it becomes all the more so during the winter months when the ground can quickly become very testing.

Runners tackling the chase course are faced with eight easy fences per circuit – four in the back stretch, one down each side of the track and a final two in the home straight – the second last of which is an open ditch. Up until 1994, the final obstacle had been a water jump, which as per the rules of racing could not act as the final flight in a contest. As a result of this, Sedgefield featured one of the longest run-ins in all of British racing – stretching out to fully 525 yards. These days that water jump has been replaced by a standard plain fence, decreasing the run-in to a far more conventional 200 yards.

Featuring some of the most forgiving fences in the country, the trickiest aspect of jumping around here comes due to the close proximity of the four obstacles in the back straight. Even taking that into account though it is unusual to see too many glaring errors, with fallers at the final two fences being exceedingly rare.

Events over the smaller obstacles feature just the five flights per circuit – one on the run away from the stands, two in the back stretch and a final two in the home straight. Having negotiated the final hurdle runners again face a run-in of close to 200 yards.

Given the mixed demands provided by this track, with the turns and undulations requiring a degree of agility and adaptability, and the stiff finish and regularly soft ground placing the emphasis firmly upon stamina, Sedgefield has a reputation as being something of a specialist’s track. As such it is by no means unusual to see repeat winners here – a statement well-advertised by the Brian Ellison runner, Fatehalkhair who entered the Sedgefield winner’s enclosure on no fewer than 13 occasions.

Other than having previously shown a liking for the track, attributes to look for are an ability to jump quickly and accurately – a quality which is particularly useful over the four fences in the back stretch. As soon as the word “heavy” enters the going description, you should quickly turn your attention to the dour stayers in the field, as it really can become a slog over that final uphill section. On quicker going however the stiff finish doesn’t see as many lead changes as you might expect, with many front runners seemingly able to save a bit and kick again following the final obstacle.

In terms of its configuration, Sedgefield certainly doesn’t provide the trickiest of challenges for the jockeys. That said, a little knowledge can still go a long way, for example an awareness that the better ground lies towards the far rail in soft going, and remembering to conserve energy for the stiff finish.

Looking at the results over the past few seasons, no rider has fared better than Danny McMenamin around here, with the Champion Conditional boasting a strike rate of 26% and a net win to £1 level stakes of a solid £35.33. Based fairly locally in North Yorkshire, Philip Kirby (16% strike rate, £11.08 level stakes net win) leads the way amongst the trainers.

Not the greatest of tracks for supporters of the market leader, there have nevertheless been a couple of small windows to a net win, coming in the non-handicap hurdles and chases (57%, +£3.06), and the handicap hurdles (38%, +£5.36).

They race just about all year round at Sedgefield, other than a break to avoid the firm ground during the warmer months of June and July. Those attending any of the course’s 20 fixtures can expect a friendly atmosphere and facilities that have been significantly upgraded from the tin huts of yesteryear, with recent developments including the Sedgefield Pavilion and the popular Theakston Suite.

Generally operating towards the lower end of the class spectrum, Sedgefield does nevertheless have its standout contests. April’s John Wade Novices’ Hurdle Series Final takes centre stage over the smaller obstacles, with the tracks feature contest of the Durham National over the marathon 3m6f trip then coming in October.