Situated just to the south of the town of the same name, Fakenham racecourse has the distinction of being the only National Hunt track in the county of Norfolk. A traditional, small countryside venue, its racing roots hark back to the late 19th century, with the first meeting at the current site eventually taking place in 1905.

Fakenham may rank amongst Britain’s smallest and relatively unheralded tracks, but it does nevertheless have the Royal seal of approval, with the Prince of Wales taking over the patronage of the course from Her Majesty The Queen in the year 2000. Opened in 2002, the track’s feature £1 million grandstand is named in honour of the Prince of Wales.

Staging around 11 fixtures, across a season which runs from October through to June, the biggest events on the Fakenham calendar are the Fakenham Silver Cup and the always popular Norfolk National which takes place in May each year. 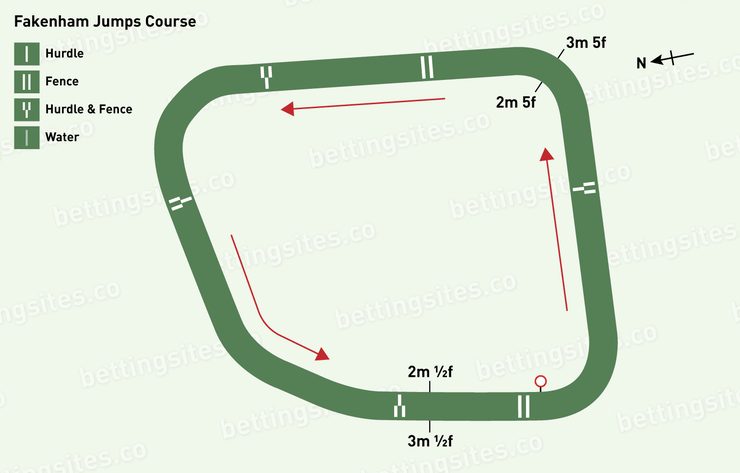 Left-handed, and in the shape of a slightly off-kilter square, Fakenham features four tight turns around a circuit of only one mile. Given these sharp turns and short straight sections, the Norfolk track is in fact the tightest of all the British National Hunt venues. Also undulating almost throughout its duration, including in the 200 yard home straight which rises all the way to the line, Fakenham is certainly a track that doesn’t suit all types of runner.

Featuring a sandy subsoil basis, the course benefits from better than average drainage, and the word “good” commonly features in the going description at the track. That said, there does seem to be a consensus amongst trainers and jockeys that the track is often more testing than the official going description would imply. Both the chase and hurdles tracks lie on the same square circuit, with the chase course utilising the outer portion of the track and the hurdles being on the inner.

Chase competitors are faced with six fences per circuit – five plain fences and an open ditch which acts as the penultimate obstacle. The fences themselves are fairly stiff affairs which, in combination with the course’s sharp and undulating nature – which can give runners less time to see a stride – does result in a higher than average number of fallers at the venue.

The hurdles course tends to be more straightforward, with just four flights per circuit – one on each of the straight sections of the track. Lying on the inner portion of the circuit though, the hurdles course is that fraction tighter. With the races over the smaller obstacles also usually run at a quicker pace than their chase counterparts, this does place more of an emphasis upon the balance of the contenders.

The standard tight and undulating track preferences apply at Fakenham, i.e. the course is undoubtedly more suited to the nippy handier type of performers, able to negotiate the bends without losing too much momentum, rather than the long-striding gallopers who often take a while to build up a head of steam and will likely be thrown out of their rhythm around here.

It does also generally pay to race prominently due to the dual benefits of being able to race on the inside, and getting the first look at the fences which can come up pretty quickly. With a run-in of only 200 yards, those at the head of affairs also don’t have too long to hang tough on the race to the line. All of that said, Fakenham is not so easy a track as it might appear from a stamina perspective, partly due to the ground often riding slower than described, and partly as races tend to be very well run around here. An ability to see out the trip well is considered as one of the key attributes required to succeed.