Usually forming a major part of the highly valued Trials Day at Cheltenham is the 41-year-old Cotswold Chase, though the 2021 edition was run at Sandown on Contenders Day due to the cancellation of the Cheltenham meeting.

It’s a race that often includes Cheltenham Gold Cup hopefuls as well as Grand National winners in the form of Neptune Collonges and Many Clouds in recent years.

The first running of this race was in 1980 and it is one of the last big three mile chases before the March Festival.

The countdown to the season-defining Cheltenham Festival is well and truly on by the time we reach the tail end of January each year, with trials season in full swing. When it comes to the preliminaries to March’s main course, there are few more significant than those staged at Cheltenham racecourse during January’s official Trials Day. A wide variety of runners are catered for on the card, including those whose main objective is a tilt at the big one of the Cheltenham Gold Cup.

Taking place over a trip of 3m1f 156yards and held on the New Course, the Grade 2 Cotswold Chase acts as the ideal testing ground for potential Gold Cup candidates each year. Open to chasers aged five years and older, the race features 21 fences in all, prior to the ultimate lung-busting test that is the famed Cheltenham Hill.

First run in 1980, the race takes its officially registered title from the range of rolling hills in the region. It has however also featured the name of various sponsors in its title over the years, with the Tote, Timeform, wine company Bibendum and Betbright all having previously lent their support to the contest.

Pointing the Way to Future Success

Touted as one of the season’s big trials for the Cheltenham Gold Cup, the race hasn’t proven to be the most prolific in highlighting the winner of March’s main event, but four runners have backed up a win here with success in the classiest chase of them all, Little Owl (1981), Master Oats (1995), See More Business (1998) and Looks Like Trouble (2000) being the quartet to achieve the famous double. Native River is also a winner of both races however his 2021 Cotswold Chase win came three years after landing the Gold Cup in 2018.

The 2020 Cotswold Chase winner Santini was the latest horse to come close to doing the same season double, finishing second by just a neck in the following Gold Cup to Al Boum Photo.

Having returned to win this again in 2001, in addition to claiming two King George VI Chases, there is a decent argument that it is See More Business who should go down as the greatest winner in the history of the race.

Another dual winner of this race Many Clouds (2015, 2017) also landed the most famous chase in the world when coming home in front in the 2015 Grand National, with 2011 victor Neptune Collonges achieving the same feat when getting up close to home in the 2012 edition of the Aintree showpiece. 1997 winner One Man meanwhile proved equally proficient when stepped down in trip to claim Queen Mother Champion Chase glory in 1998.

Seven to Nine the Key Ages

Given how prolific a combination they were, it is perhaps surprising that Martin Pipe and Tony McCoy registered just the one success in this race. It was however a significant one, with 1999 victor Cyfor Malta being the youngest winner in the history of the race at six years of age. 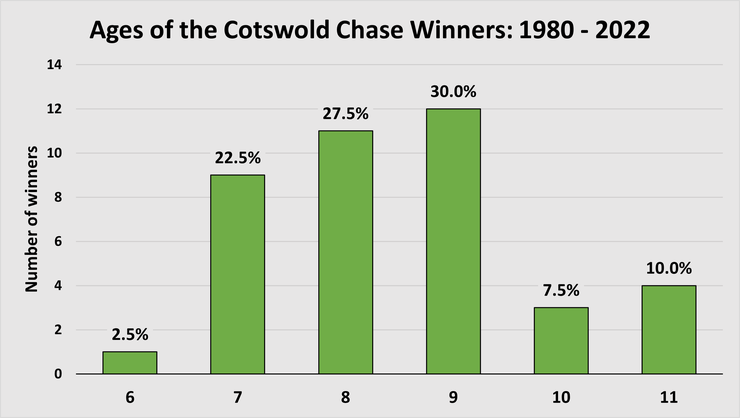 At the other end of the spectrum, See More Business (2001), Grey Abbey (2005), See You Sometime (2006) and Native River (2021) all landed the prize at the grand old age of 11 years old. Overall though the race was been dominated by runners aged between seven and nine years old, with that bracket accounting 80% of the winners up to and including the 2022 renewal.

This has been a pretty tough race for trainers to rack up much of a sequence over the years, with only three handlers managing to claim top spot on more than one occasion. Lesley Ann and Combs Ditch propelled David Elsworth to back to back success in 1982 and 1983, whilst the aforementioned Many Clouds accounted for both of Oliver Sherwood’s trips to the winners enclosure. Forty years separated Nicky Henderson’s first two wins in this race. Having won the very first Costwold Chase in 1980, it wasn’t until the 2020 running that Henderson added to his tally. When it comes to training performance in this race though, there is one man who stands head and shoulders above the rest. 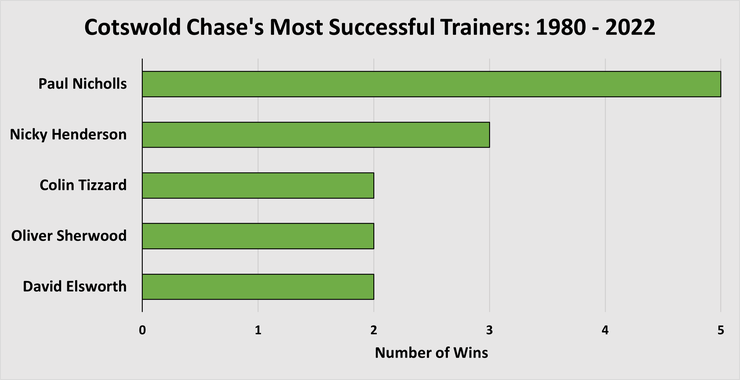 Now needing more than the digits on two hands in order to count his British Champion Trainer titles, Paul Nicholls has racked up an impressive five wins in this event, and given his proficiency with the staying chaser, it would take a brave man to bet against him building further on this total in the years to come.