Gold Cup Day at Cheltenham might run it close, but in terms of a single day’s racing, there are few cards – if any – to which we look forward to more than Derby Day at Epsom. Still the original and still the best, the oft-imitated Derby  is one of the undoubted highlights of the entire racing season.

The first Derby was run in 1780, won by Diomed owned by Sir Charles Bunbury. He collected just over £1000 for the victory. The race now has a prize fund of over £1.6 million making it Britain’s most valuable horse race.

The 1m 4f Derby begins at the south-west point of this horseshoe shaped course, at the far said of the track from the grandstands and finishing post. Runners travel east along the back straight before rounding the bend anticlockwise and joining the home straight.

About the Epsom Derby 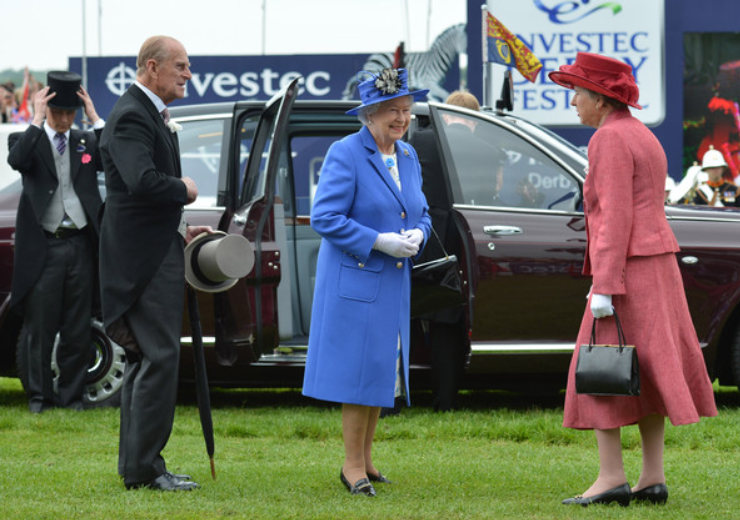 There are five Classic contests on the British flat racing calendar, all of which bestow a significant quantity of prestige upon the winner. There is however one Classic which sits just a notch above the rest and that is the Epsom Derby.

It’s not the oldest, or the most stamina sapping of the five jewels in flat racing’s crown – both of those honours belong to Doncaster’s St. Leger – nor does it place quite the same demands on speed as the 1000 and 2000 Guineas. The Derby is however viewed as the most thorough and searching test of the Classic generation.

A little bit of everything is needed in order to prevail here. Horses need great stamina to see out the 1m4f trip but they also need the balance to handle the twists, turns and undulations of the unique configurations of the Epsom Downs track. On top of that, they also require a fair dose of speed. Slow horses simply don’t win the Derby.

Taking place on the first Saturday in June each year, the race – in common with the other Classic contests – is open only to three year old runners. Whilst fillies are permitted to take their place in the line-up, it is exceptionally rare to see one do so, making this effectively the championship middle distance event of the season for the most talented three year old colts in training. Here we take a closer look at the most famous flat race in the world, the oft imitated, but never equalled, Derby. 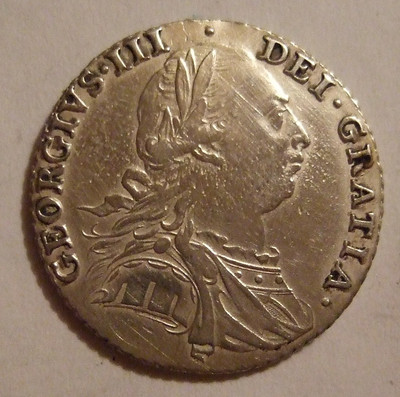 The Derby is now a race name famous the world over, but where did it initially come from? As with so many of Britain’s races, the answer is found amongst the British nobility of years gone by.

Having already named The Oaks after one of his nearby estates, the 12th Earl of Derby was looking for a name for this new race, which was first run one year after the inaugural Oaks of 1779. Rumour had it that the Earl and the Steward of The Jockey Club at the time, Sir Charles Bunbury, flipped a coin for the right to have the race named in their honour. The coin came down in the Earl of Derby’s favour, and history was set.

But for the fall of that coin we may well be referring to this race as the Epsom Bunbury, and also have the likes of the Kentucky Bunbury, Australian Bunbury, French Bunbury and the New Zealand Bunbury on the international calendar. Doesn’t have quite the same ring to it somehow. Sir Charles did have a race named in his honour in the end in the form of Newmarket’s Bunbury Cup. Again, just not quite the same!

LITTLE CHANGE IN OVER 200 YEARS

The 1780 inaugural running of the race looked a little different to the event we know and love today, taking place as it did over the shorter trip of one mile. The race length was increased to 1m 4f as early as 1784 though, and has remained that way ever since.

The Derby has called Epsom home for every edition of the race other than during the war years, when necessity dictated that it be moved to the traditional home of British flat racing, Newmarket. For a race with such a long history, remarkably little has changed over the (many) years.

THE DERBY: A ROAD TO RICHES

Whilst the trip and location have remained largely consistent over the years, the prestige and value of the contest have continued to grow and grow. Worth just over £1,065 to connections of the very first winner, prize money stood at a whopping £1.6m in 2022 making this Britain’s richest flat race at the time. The prize fund was lowered to £500,000 for the 2020 race as a result of the meeting being held without racegoers. This moved back above the £1m mark to £1,125,000 in 2021 and back to £1,604,000 in 2022. 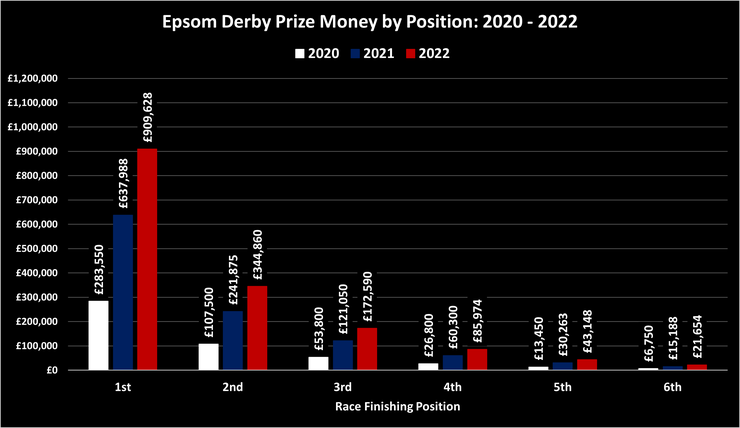 The prize money is not an inconsiderable sum in its own right, but when we also factor in the fact that winners of the race often go on to a multimillion-pound career at stud, we get some idea as to why this race is such a big deal, and the one everyone wants to win.

Many a legendary racehorse has come home in front in this race over the years, but none have completed the course in quite so quick a time as Sir Michael Stoute’s 2010 winner, Workforce. The son of King’s Best bombed out on his next start after winning here, but proved his class in going on to a famous success in that season’s Prix de l’Arc de Triomphe. As of 2022, Workforce’s winning time of 2m 31.33s is yet to be equalled around here.

Never to be forgotten due to the unfortunate events which followed his Epsom triumph, no horse has won this race with such authority as another of Sir Michael Stoute’s winners, Shergar. Tragically kidnapped and reportedly killed by the IRA following his Derby win in 1981, the 10-length beating he handed out to his rivals that day stands as the record winning distance in the race as of 2022.

Results are however often somewhat more predictable. Golden Horn (13/8), Australia (11/8) and Camelot (8/13) being three recent examples of market leaders to have obliged in some style. The shortest priced winner of the lot though came way back in 1894 when Ladas came home in front at a prohibitive 2/9. 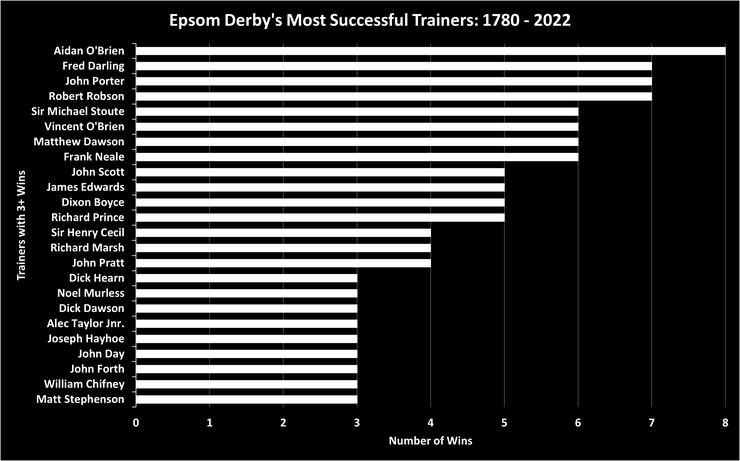 As we can see from the above table there are a whole host of trainers to have compiled a formidable record in Britain’s greatest flat race, with eight now being the magic number leading the way as of 2022. Fred Darling, John Porter and Robert Robson won’t be adding to their totals now, so one man who may extend his lead over them all is Irish training sensation, Aidan O’Brien, who reached the top of the trainers chart in 2020.

Beginning with 2001 champ Galileo – who has since gone on to become perhaps the greatest sire in history – O’Brien quickly acquired an outstanding record in this race, with two of Galileo’s sons, Australia and Ruler Of The World helping him to a total of eight wins. With more top talent coming off the Ballydoyle production line year upon year, it would take a brave man to bet against O’Brien holding the record long into the future. 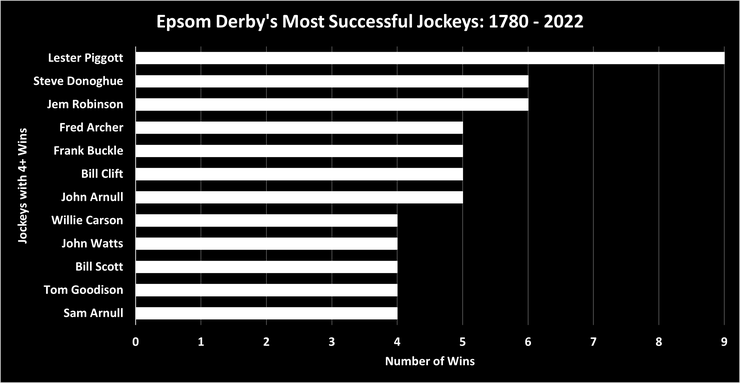 The more you look into the history of Britain’s biggest flat races, the more you realise just how much of a dominant force the great Lester Piggott was during his long and illustrious career.

The Epsom Derby is just another in a long list of top class contests to have fallen under Piggott’s spell, and it is “The Long Fellow” who is way out in front on his own in the list of top riders here. With no current jockey within sight of Piggott at present, this is a record that will likely stand for some time yet.

Lester Piggott passed away just days before the 2022 renewal of the Derby, with the race named the Cazoo Derby (In Memory of Lester Piggott) to commemorate one of the world’s greatest ever jockeys.