Goodwood sees the summer out in style as they hold their three day August Bank Holiday fixture which runs from Friday to Sunday. The highlight on the Saturday is the Group 2 Celebration Mile which is the most valuable race of the meeting.

The first Celebration Mile was run in 1967, and the race was awarded Group 3 status in 1971 when the ratings system was brought in, rising to Group 2 in 1977. Winning the 1971 renewal was none other than Brigadier Gerard who was arguably the greatest flat horse of the 20th century, winning this by 10 lengths in the same season as he won the 2000 Guineas, St James’s Palace Stakes, Sussex Stakes, Queen Elizabeth II Stakes and the Champions Stakes.

The trip is a mile for this Group 2 contest which offers total prize money of £60,000 this year. The ground at the track is currently described as good to soft, though more rain could be on the way by the look of the forecast.

Open to all runners aged three and older, this contest has seen an even split amongst the winners in recent years, with five of the past 10 editions falling to the Classic generation, and five being won by a runner aged four years or older.

Sir Michael Stoute is without a win in the race in the last 10 years, but with eight previous victories, it is the Newmarket handler who is out in front in the all-time trainers table. Stoute sends the well-fancied Regal Reality into battle this time around.

This has been a fair race for favourite backers in terms of strike rate, with four of the last 10 jollies getting the job done. All four of those winners have returned relatively short prices though, resulting in a level stakes loss of £1.45 for supporters of the market leader.

Just the seven runners go to post this year, but this nevertheless looks to be a high-quality renewal with three of those seven runners having already scored over the track. Of that trio, the two course and distance winners, Duke Of Hazzard and the aforementioned Regal Reality, make obvious appeal and have duly made their way towards the head of the market.

Duke Of Hazzard’s win over track and trip actually came in this very race last season, and he again ran with credit when second in the Lennox Stakes this season. However, having bombed out completely at Salisbury last time out, it may be that Regal Reality is the more solid option here – particularly considering the impressive record of his trainer in this race. A three time winner at Group 3 level, this son of Intello is yet to score in Group 2 company, but has performed with real credit in top company, including when beaten under three lengths by Enable in the Group 1 Coral-Eclipse last season.

A little below par in his first three starts of the current campaign, the application of a first time visor looked to spark a significant revival last time out at Salisbury. Travelling nicely in behind the pace that day, he did take a little bit of rousing in the straight, but ultimately finished much the best to come home three and a half lengths to the good. This does look a little tougher than that Group 3 event, but a repeat of that effort should put him right in the frame.

Godolphin’s Benbatl is the top-rated runner in the field and an obvious threat to Regal Reality, but at a bigger price, the one who we fancy may emerge as the biggest danger of all is the William Knight-trained four year old, Sir Busker.

This son of Sir Prancealot is yet to be tried out of handicapping company but, having been handed a mark of 111 by the assessor, now looks to be the time to give Group races a crack. In truth, this hold up performer has looked a notch above a handicapper on more than one occasion this season. Impressive when scything through the field to land the Silver Royal Hunt Cup at Royal Ascot off a mark of 92, he was equally good when coming from what looked to be an impossible position and failing by only a neck to reel in Montatham at York last time out.

William Haggas seems to rate Montatham as a Group performer in the making and Sir Busker was conceding three pounds to him that day, and but for being shuffled so far back early on, he surely would have prevailed. Ignore his effort at this track earlier in the season, as he simply enjoyed no luck in running at all that day, and he has already proven his ability to handle Goodwood when scoring here over seven furlongs last season. He looks a horse on a steep upward curve to our eyes and can go well for Callum Shepherd.

About the Celebration Mile: A Fine Mile Contest from Goodwood

The Celebration Mile is a flat horse race which is run at Goodwood racecourse each year towards the end of August. The contest is for horses aged three years and older. The race is run on a turf surface around a right-handed track. The prestigious event was first run in 1967 under the title of the Wells Mile, and was won by three year old St Chad. In 1971 the race was upgraded to a Group 3 race and renamed the Goodwood Mile.

From 1975 the race was once again renamed the Waterford Crystal Mile, then upgraded once again to Group 2 status in 1977. Then 1989 was the year the race was given the title it operates under today. The race holds similarities to the Queen Elizabeth II Stakes which is run at Ascot in October as part of British Champions Day. The last horse to claim victory in both affairs was Poet’s Voice in 2010.

Controversy Over The Years

The high profile race has seen its fair share of mishaps over the last few decades. In 1985 the entire event had to be abandoned due to a waterlogged course. Cape Cross was the horse who finished first in the 1997 contest but after a stewards’ enquiry his winning status was revoked. Not only that, but instead of being awarded second place, which is commonplace in such scenarios, he was placed dead last due to the infringement. Last but not least is the case of Delegator who passed the post first in 2009 only to be disqualified due to testing positive for a banned substance.

Despite all the lows there have certainly been many more highs at the event over the years. The record holders list begins with none other than Sir Michael Stoute, who has saddled no fewer than eight winning runners over the years, ranging from 1987 with Milligram to 2009 when Zacinto claimed the spoils. There are three in total who lead the way for the jockeys. Joe Mercer, Willie Carson and Greville Starkey have four wins apiece in this event over the years. As for the equestrian successes there are two horses who have struck on more than one occasion, Chic in 2004 and 2005, and Lightening Spear in 2016 and 2017 who both hold that record.

When analysing the records of previous winners there is one glaring piece of information that cannot be overlooked. As you can see from the chart below 10 out of the 11 races up to 2019 were won by horses in the top three of the betting, and nine out of the 11 were either the favourite or second favourite. Only the 2012 winner Premio Loco bucked that trend when winning off a 20/1 starting price. This is data which is hard to ignore so be sure to scrutinise any possible selections outside of this criteria as the market appears to know better in this particular race. 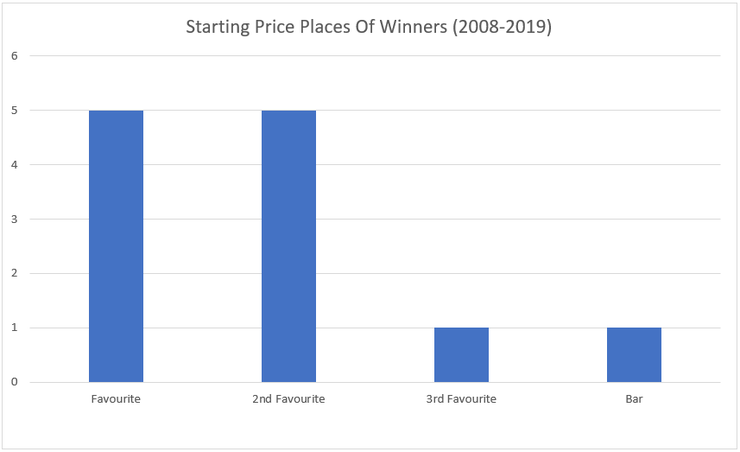